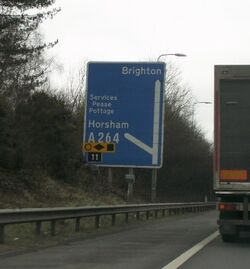 The tiny writing at Pease Pottage reveals it wasn't in the original plan.

The phrase "stealth motorway services" is a tongue-in-cheek and unhelpful way of describing a service area which took an unorthodox route through the planning process. Understanding it involves taking government policies and insisting that they are followed to the letter. In other words, this page is only for super-nerds.

The theory was once perfectly sound. Originally, the only facilities that could be advertised from a motorway were the ones that were owned and regulated by the Ministry of Transport (or their successors). If you owned a petrol station that happened to be close to a motorway, you had no chance of any signs going up on the motorway. The policy was clear.

Then operators found another method. There are no regulations preventing them from building a service area on an A-road. If they built a service area on an A-road that happened to be next to a motorway, they could tell the Ministry that this was just a coincidence and they understand that no signs would be allowed on the motorway. And then, once this had been approved, they could set about trying to convince the Ministry to put some signs up anyway. The Ministry wanted to make its roads safer, it wanted to avoid spending money when it didn't need to, and it wanted to maintain good relations with service station operators. All of those points mattered more to them than sticking rigidly to the rules.

So exceptions were made, and the Ministry started to acknowledge motorway service areas that it didn't own or approve of. Motorists weren't to know any different. That's why we called them "stealth services".

These days, none of that matters. In 1992 matters were made even more blurred as the government announced that they were selling the land motorway services were built on. Instead, we would define a motorway service area as a service area with all the relevant signs on a motorway. This meant that there was no longer any such thing as a "stealth" service area because if it had signs then it would count. Technically, it is still possible to have a service area with signs that the government didn't want to put up, but the regulations have now become so relaxed it would be very difficult to breach them.

While the phrase is now irrelevant, we can still use it to look at the history of how some of the motorway service areas got there. 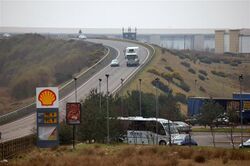 There are lots of services near motorways, but we're looking for the ones which have some signs.

The following services are now signposted from a motorway, but they weren't initially supposed to be. We are ignoring services which were built before the motorway (like Old Inns), as there was no hidden agenda there.

Some of their histories will be genuine. If you were a business wanting to build a service area on the A34, naturally you would choose the busiest junction - which was the junction with the M4. Once you've built it, you might discover that the M4 has a history of driver tiredness and that for the price of a few extra signs you had the power solve it. It might be a genuine coincidence. However, some of them would have been built with the intention of bending the rules.

There are lots of other examples of services which are positioned next to motorways but only serve local traffic, like Markfield and Markham Vale. These might be "stealth" in the correct sense of the world, but unless we can prove that they were hoping to be upgraded, they aren't what we are looking for. In the case of Tiverton, we know it did want to be signed from the M5, but not without a total rebuild: Forte simply wanted to make the most of the land they already owned.

The Importance Of Colour 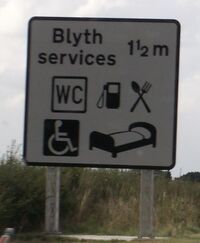 Blyth has white signs, but we're accepting it's serving a motorway then they should be blue.

The subject gets even more complicated, pedantic and contradictory when you start looking at the key to it all: road signs.

The problem is that while the rules are very clear, highway authorities have a very poor record when it comes to following them correctly. It's therefore very common to think you've stumbled upon a smoking gun when in fact all you've discovered is that the person who designed the road signs was as confused as we are.

At Pease Pottage, West Sussex County Council eventually replaced the white signs on Brighton Road with blue ones. This matches the fact that the place is now signed from the motorway, like it was having its classification upgraded. Unfortunately, at around the same time, the Highways Agency placed a brand new, white, road sign on the M23. This should make it clear that it would be silly to read too much into what the road signs are trying to tell you.

As stealth motorway services tend to have their road signs placed on the motorway via what is basically just a gentleman's agreement, you will usually find that the job gets done on the cheap, with much fewer signs than required, signs in the wrong place, and the wrong information on the signs. The average motorist would never notice, but once you know what you're looking for it becomes clear when half of it is missing!