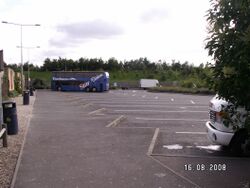 This page attempts to give some general information aimed at drivers of Heavy Goods Vehicles (HGVs) and coaches who use motorway services.

As with every feature on this website, we endeavour to keep the details up-to-date, but things can and will change. We hope to provide a useful overview, but for answers to specific queries you should ask the operator.

Coaches are valuable to service areas as they bring a large amount of custom, but this custom can lead to sudden surges which the services struggle to handle. This also means that the services only benefit when there are many passengers present, so to prevent people using the discounts in other circumstances strict and frequently-changing rules often apply to them.

The different schemes are listed and compared below. To find out which service area is owned by which operator, use the Services Search. These discounts are for vehicles carrying passengers only. You should check with each operator before relying on this list.

Most motorway service areas have dedicated coach parks. A-road services are more of a mixed bag, and coaches are often expected to park with HGVs - if HGV parking is available. Complaints about unauthorised vehicles blocking the coach park should be directed to the operator.

Why are so many meals available for 1p?

For at least 20 years, many of the discounts available to coach drivers have involved the sum of 1p. Despite it being an awkward piece of change and inflation having had a big impact on other prices, the 1p fee has generally remained and has even been reintroduced in some places. The reason is that a purchase and a giveaway are different concepts with different legal rights. Normally when something is given to you for free, it is added to another purchase you were already making, but with this offer you are not being asked to make any other purchase at all.

As a result, for your meal to count as a purchase, and therefore offer you the same rights as any other customer gets, you must offer something in return. In this case what you are offering is the smallest amount of money it is possible to be charged, however silly it might seem. 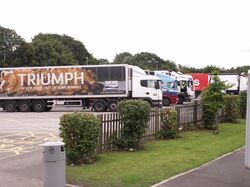 Although lorry drivers don't bring much custom with them, they are regular users of motorway services and as a result the operators are keen to have them use as many facilities as possible. Most services these days now provide showers (the quality of which does vary), and allow you to open up an account for parking on request.

As of 2008, dedicated motorway truckstops are now permitted, but as of 2019 none have been proposed. Several new truckstops have opened near A-roads in recent years.

Following an increase in reports of theft and vandalism within motorway lorry parks, some service areas are now employing security guards, and Corley northbound is trialling a secured parking area.

Unfortunately, there is a history of HGV drivers causing more trouble than any other class of vehicle at service areas. Many services have introduced a no-tolerance policy for HGVs parking in the wrong place, even if it was a mistake, and will clamp on sight. This can be difficult because many sections of the motorway network have a severe shortage of HGV parking, something England's national highway authority has acknowledged but done little about.

There have also been reports of some drivers behaving irresponsibly, which little can be done about, but it does weaken the case for improving facilities for HGV drivers. Improvements start at the centre.

Why is lorry parking so badly managed? 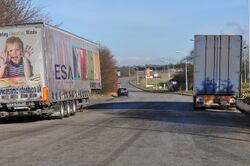 The UK has a chronic shortage of safe places for HGVs to park so their drivers can take a break. There are several reasons for this.

When the early motorways were built, HGV driving hours were not so strictly regulated. The service areas did not consider overnight parking at all, and only built enough parking spaces for HGVs to take a 20 minute rest break... at 1960s traffic levels!

By the 1980s, the majority of motorway service areas were overcrowded with resting HGVs at night, as they continue to be 40 years later. High land prices, local objections and vandalism have made it difficult to rectify this.

Government policy has always been that motorway service areas exist to make money, and successive governments have wanted no involvement in them. Inevitably this means that the service areas are more interested in leisure drivers than HGVs. Where HGV parking is provided, it is treated not as a moral obligation but as an income stream.

It would be unfair to suggest that motorway service areas have never taken an interest in HGV drivers, but rather they are fulfilling their role as a private business. Besides, the regulations do force them to prioritise short stays over overnight parking.

More recently, the number of HGVs taking breaks in dangerous places (including old-fashioned lay-bys) has presented a major safety, and in some cases environmental, issue. Closing dangerous lay-bys addresses this but at same time puts more pressure on other makeshift parking places. At Cobham services, it was estimated that the HGV parking area was built more than half as small as it needed to be, and it was already one of the UK's biggest.