Price Point: Why are motorway services so expensive? 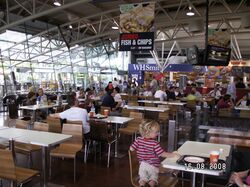 Service area restaurants are notorious in just about every respect.

Since the dawn on time, motorway services have been lambasted for their poor quality and high prices. Changes to the choice of food appear to have addressed the quality issues, but complaints about pricing remain. In 2019, just 59% of service station customers said they felt they had received value for money, while 91% said the food was "good".

Now that most service stations are using food and retail brands that can be found on the high street, customers expect the prices to be the same as the high street too. They are not. The vast majority of food prices at motorway outlets are set by the service area operator, so there is no competition between each outlet.

Customers have always blamed this motorway premium on corporate greed: motorway services are private businesses out to make money, and they know that the majority of their customers would not be willing to leave the motorway to find somewhere else to stop. Their only real competition comes from each other, and given that there are only three operators, this has created an oligopoly.

In addition, the motorway services industry is a difficult industry to enter. It is dominated by existing powerful firms, and building a new service area requires a massive investment and a lot of work with planning and highway authorities. Until 2013 there was also a ban on building too close to an existing service area, but this no longer applies. Even so, operators can take comfort in that for the most part they will only have each other to worry about.

Having said all that, we don't want to be too critical of operators. The large costs that keep new entrants out of the industry apply to existing firms too. Operators have been saddled by large amounts of debt owing to the investment required to build and maintain their estate. New developments tend to cost over £30m, and many sites are paying landowners as much as £2.5m in rent per year.

If operating a service station was as easy as it sounded, obvious candidates such as supermarkets wouldn't have turned their noses up at the idea of running one. 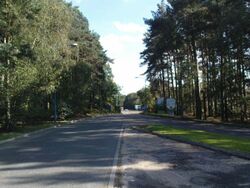 Long slip roads are property of the operator too.

The obvious problem service stations have to contend with is the requirement to be open 24 hours a day, selling fuel, food and drinks even in the early hours of Christmas morning. The vast majority of customers - previously thought to be as high as 70%-90% - are only using free facilities such as the toilets and the car park, which are provided at great expense.

This regulation can be so constraining that some developers are now opting to build a site next to a motorway but not register it as an official service area (which would involve signing a Traffic Signs Agreement and placing signs on the motorway). Doing this allows them to make the site as small as they wish, discourages non-purchasing customers and means the developer can close when they wish.

Some services are located in remote areas and recruiting and retaining staff for what is essentially a retail job can be difficult. Staffing is made more difficult by the fact that trade levels can be very unpredictable: at one moment several coaches may stop together, at the next the motorway may be blocked by an accident. London Gateway, for example, lost three days of trade, hotel bookings and stock because the M1 was closed for an incident.

The remote locations can raise other operating costs too, including the cost of building a sewerage system that can handle the high customer levels, as well as the costs associated with calling out contractors and arranging deliveries.

Motorway services tend to be built over very large grounds, and these come with lengthy road networks that are expensive to repair and maintain. Unlike in some other countries, service stations are responsible for repairing the road right up to the motorway boundary. Another key difference with the rest of the world is that British motorways have very dense traffic flows, so large car parks and dining areas are required to make room for all the custom that may or may not be arriving.

The final issue is that many of the UK's motorway services were built in the 1960s, and are now over 50 years old. These buildings can be difficult to manage, not just because their layout isn't good for modern catering, but because they require regular maintenance, often straddle the motorway and quickly look tired.

As early as 1965, a government statement responded to building criticism by saying "we cannot dictate prices but we are concerned that they should be reasonable". However, they remained reluctant to accept there were any issues. They said that the nature of the business meant there were high running costs, especially at night, and when they investigated, they found prices were not as high as they were expecting.

The first problem was the rent arrangements which had been made. Service stations used to pay rent as a proportion of their turnover, not profit, so investment would result in a rent increase even before profit had gone up. This meant several early operators struggled to break even (an estimated 3 out of 12 were losing money in 1966). Service areas were eventually sold the freehold of the land they were built on.

Since then the government has always had one word in response to price complaints: deregulation. Initially it was one of the most heavily regulated industries in the country, with limits on shop sizes, little control over the site layout, a total ban on promoting your facilities and a rule that effectively prevented them being too popular. These all ate at costs, but regulations were cut back on in 1979, 1992 and 2013. Now the industry is much more free market. 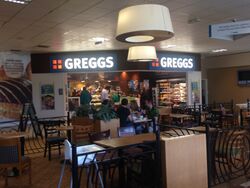 Customers at this Greggs are asked not to eat here, for tax reasons.

Some people will go to great lengths to avoid spending money at a service area, from packing their own food to even heading down unknown B-roads in a desperate bid to find fuel. For many people this isn't practical, so they may instead prefer to head for the fast food chain for lunch or just WHSmith in order to find enough snacks to keep them going until the next stop.

Service areas do occasionally run their own promotions, which are listed below, although now that they rely on big-name food brands, service area specific offers are becoming rarer. The nature of the franchise agreement means that brand's promotions may not always apply, so always check the small print. Costa and Starbucks cards are accepted, for example.

It is also worth noting the difference in pricing strategies: McDonald's tend to only charge a small mark-up, while KFC tend to charge a much larger one.

Holders of discount cards such as Blue Light, Forces and Veterans discounts should always check, as most are accepted. For students, Moto provide discounts to NUS card holders, while Roadchef are part of the UNiDAYS scheme.

Coach and HGV drivers often have no choice but to use a motorway service area, so the operators often provide special discounts to attract them to their facility in particular: these are detailed on the Professional Drivers page.