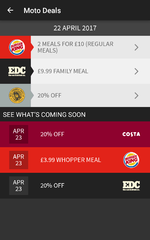 As with almost every retailer, the major motorway service area operators now all have mobile phone apps. These generally include location finders, online ordering and a small number of discounts.

In addition, other brands such as McDonald's have an app that can be used at service areas. Despite a push towards apps like these, a 2022 study found that only 2% of service station customers order their food by app.

Many of Moto's restaurants have a Costa franchise which will accept either the Costa discount (on Costa goods only) or the EDC discount, whichever the customer prefers. Some M&S and WHSmith stock overlaps too, and soft drinks can be bought from almost any franchise. The app requires a network connection to be live for it to be visible to staff.

The app was redesigned in 2015, to match their new website. The updated version included several offers varying in scale, and a preview of the next day's deals.

The app was updated again in 2020, with Moto's new corporate branding. In response to the ongoing COVID-19 pandemic, the app includes a link to Moto's online ordering portal, which supports Burger King, Costa, Chow and links to KFC's app. It also includes a native branch finder, promotions page and fuel price checker. The daily deals were suspended during the lockdown.

Although not strictly Moto's work, in 2011 Domino's Pizza announced they would be opening sites at many Moto services. One of the main benefits of this was that passengers could use Domino's' own app to make their order while approaching the services, meaning it could be ready when you arrive. The agreement with Moto didn't prove successful and the pilot store at Leigh Delamere closed.

Moto used to provide vouchers and deals on their website.

Welcome Break were very slow to develop an app. Instead they had been very active in building a social media following, and at first used this to run promotions, competitions and discounts, including a £1.99 cooked breakfast. Until the 2016 redesign, offer were also promoted on their website.

Welcome Break launched their app in 2020, during the COVID-19 pandemic. They use it to provide online ordering for Burger King and PizzaExpress. A 'deliver to car' service was trialled at Birchanger Green in June 2021. 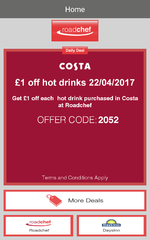 Roadchef quietly launched their app in April 2014. It had a built-in list of locations and their facilities, and each location would then have up to four discounts attached to it. The discounts, depending on the facilities available and the date, vary between:

The most valuable discount (unless you were a particular fan of crisps) was the hot meals for £5, which broadly matched Moto's 40% off or two for the price of one at EDC. Left out of the offers were McDonald's and Chozen Noodle, due to franchise restrictions.

The same deals were also available on their website.

Roadchef's app was removed in around 2020.

As part of their loyalty scheme for coach drivers and tour guides, Roadchef have developed an app for their membership scheme. The app allows you to collect and redeem loyalty points.