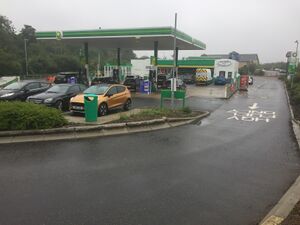 One of the newer services on the A120 opening in 2016, the site is positioned at the Panners junction slightly west of Braintree. It is sometimes referred to as 'Braintree services' although that gets mixed up with the service area to the east.

Parking and use of the forecourt is limited to 30 minutes maximum stay from entry to exit and is strictly enforced by BP whilst guests of the hotel must provide their vehicle registration number to reception in order to receive free parking during their stay as the car park is controlled by ParkingEye. Chargeable parking is also available 24/7 within the hotel car park via the JustPark app. 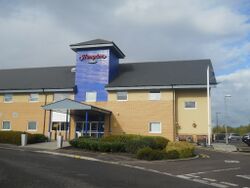 The area around the Panners junction has seen a lot of development. The land that the service area is built on used to have the A120 cross it, but this was removed when the bypass was built, making it suitable for purchase.

Plans for a service area here date back to 1991. It was proposed by Countryside Commercial Plc, who were working with Norfolk House, who we know had worked with Little Chef and McDonald's. Planning permission was granted for a petrol station, hotel and restaurant, and this was renewed in 1997. It remained unused.

In 2004 Heritage Braintree proposed a service area here, which they called Notley Park. It had two drive thru restaurants, a Sleep Inn hotel and a petrol station. Planning permission was granted. Curiously, despite it being the 21st century, the design included two parking spaces at the back designated for "ladies only".

The hotel opened in December 2007, but a last-minute change saw it become the first Purple Hotel in the country. This brand didn't last long, and in 2009 it became Blueberry Hotel. It soon changed again to Hampton by Hilton, and in 2012 it became Holiday Inn Express.

In 2010, despite there still being no restaurant, the road layout was changed to make space for one large restaurant instead of the previously planned two. The Toby Carvery eventually opened in 2012.

Unusually the petrol station was the last part of the development to open, only opening in 2016. At this point it could finally be considered a full service area, and gained official signage from the A120.