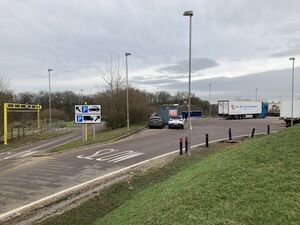 A120 between the M11 and Braintree

Signposted from the road? As a tourist attraction

Although this isn't technically a service station, it is a pair of purpose-built car and lorry parks maintained directly by England's national highway authority - and for that reason, it gains a place in our listings.

Unlimited free parking is available for all vehicles on both sides. 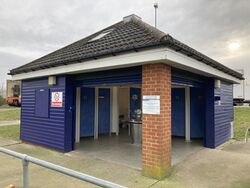 One of the toilet blocks, the main facility here, with the Highways Agency's logo still on it.

Both sites opened with the new A120 dual carriageway in 2004. They were built according to the rarely-used design guide for 'picnic areas', but those involved with the project decided to signpost the new facility as a "rest area".

Both sides gained dedicated hardstanding for catering facilities in 2011, although these have never actually been used by the traders. The eastbound side used an old coach for a time, whilst both sides have mostly received catering from the standard snack bar trailers. The eastbound catering has recently been provided from a portable building.

Now that a "rest area" is actually an official class of facility, the highway authority - who are still responsible for maintaining Great Dunmow - agree that it doesn't fall into that category and is actually just a well-provisioned lay-by.