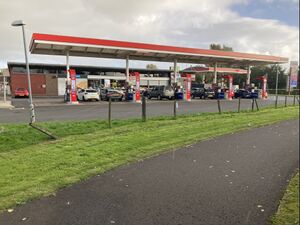 Part of the Lomondgate housing development includes a large, purpose-built service area, although there is no official advance signage.

Parking within the Brewers Fayre and Premier Inn shared car park is free for customers and guests. You must provide your vehicle registration number to the bar or reception to gain free parking during your stay.

Chargeable parking is also available 24 hours a day, 7 days a week in the Brewers Fayre and Premier Inn shared car park and can be paid via the Horizon Spaces app using location code 10035. These fees are strictly enforced by Horizon Parking. 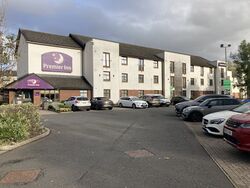 The service station here was developed on a parcel of land left next to the housing development by The Walker Group in partnership with Strathaven Regeneration Company. The land was designated for business, retail and leisure purposes and building work started on the service area in May 2010.

The filling station was the last facility to be added to the site with Euro Garages purchasing the 1.1 acre plot of land from The Walker Group in October 2013. Construction then started on the filling station in March 2014 and was Euro Garages's first purpose-built Scottish site. The Esso filling station opened on 25 April 2015 and featured a SPAR store with Greggs and Subway concessions alongside a Starbucks on the Go coffee machine.

Jaconelli's Fish Diner was later built on a plot of land next to the Costa Drive Thru in 2015 however this closed in 2018. The unit was purchased by Euro Garages who intended to convert the unit into a Burger King Drive Thru but instead opened the unit as a Starbucks Drive Thru on 8 October 2021.

There is also a plot of land here to the north of the filling station which had been lined up to house a visitor centre, however this is yet to be built.

The Premier Inn hotel and car park were extended in 2017, with the car park gaining an additional 79 spaces.

Euro Garages were awarded Forecourt Retailer of the Year at the Scottish Grocer Awards 2017 for the Esso filling station here.