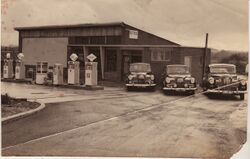 The forecourt here was known as Drayton Filling Station , originally developed in 1959 by a family run business on former War Department land, with a loan from National Benzole. They already had a relationship with that company from running a small garage in Andover, five miles to the west.

In 1943 the War Department had acquired much of the surrounding farmland for the construction of four separate military 'camps', using this small parcel of land as the yard for construction materials; on completion of the bases they obtained Planning Permission for a petrol station and sold it at auction with that benefit. The A303 having been designated as a Trunk Road in 1958, and with future planned highway improvements known, the site was constructed some distance south of the road with long access lanes to and from what is now the eastbound carriageway.

The building comprised a repair workshop for three cars facing the rear yard, the shop in the centre and customer toilets at the western end. There were two pump islands each with two pumps - a 4-Star 'Super', two 3-Star 'Regular' and a 2-Star 'Power', fed from underground tanks below the concrete. A DERV pump accessible from both sides and supplied from an above-ground tank was located behind the toilets, which lorries could get to by driving round the back of the building - off to the right of this picture.

To the east was a pair of wooden dwellings called 6 and 7, Drayton Pump Cottages (named after Drayton Pump Farm, numbers 4 and 5 were 300 yards away) which were let; a residential caravan site (the first in the district, Licence No. 1) of 8 units was positioned at the rear (now modernised and called Drayton Park), which is still there today.

The family also built and operated an adjacent catering business to the west, where they lived at the rear and above. The side entrance nearest the forecourt was to the transport café whilst the front entrance was for the slightly smarter restaurant part, which had table cloths! With car parking to the north and west, to the rear was a large garden with many chickens to supply eggs for truck drivers' sandwiches.

In 1968 the A303 was dualled from Bullington Cross to Weyhill, the new westbound carriageway running across the front of the site, between it and the old road. The restaurant building was leased to Wimpy, later to become a Little Chef, which was then operated by Trusthouse Forte. For Little Chef this branch was one of a pair, as they opened one on the other side of the A303 at nearby Longparish. 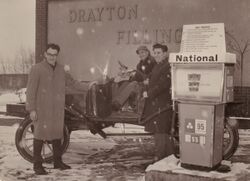 At this time, one of the first coin-operated pumps in the area was installed, allowing Three Star (95 Octane) petrol to be dispensed at night by inserting half-crowns (the largest value coin of the time, equivalent to 25 pence now). Petrol then cost 5/5 (27p) per gallon, equivalent to 6 pence per litre! The fluorescent lights in the pump attracted huge hawk moths, that got inside the glass panels. On decimalisation in 1971 and with rising petrol prices, it was converted to accept bank notes. 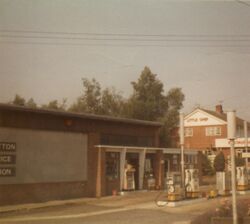 For a brief period the forecourt was branded Shell before being leased to Mobil around 1977.

The original forecourt shop and attached vehicle workshop accessed from the back were demolished, Mobil developing a larger four-island forecourt and a small shop facing the road. No expense was spared, with genuine terrazzo flooring installed by contractors from Italy, red textured facing brick and black mortar joints. The family's car repair business moved into a much larger workshop erected behind it on what had previously been the open rear yard.

Around this time, Little Chef refurbished, erecting external steel stairs up to staff accommodation on the first floor, enlarged the seating area and kitchen and put new toilet facilities in what had been the family's living room.

As traffic levels increased, the site became too cramped and in 1986 Trusthouse Forte and Mobil embarked on a joint project to redevelop a new restaurant and service station.

The forecourt became as wide as the plot allowed, with six islands and a new shop at the head, 90° on, traffic exiting round either side of it - and a derv pump against the southern boundary. The Little Chef was built on the garden of Cottage No. 6; the car repair business connected to the original garage was relocated to the former restaurant, with an additional workshop being built on its car park.

On a busy holiday route from London to the West Country, the site was chosen by THF as a trial location for a Little Chef Lodge which became Travelodge, built to the south, east of the mobile home park.

The forecourt changed from Mobil to BP on that merger, before changing operator to MRH who branded it firstly Shell and then Esso, it is now known as Barton Stacey Services and following their takeover of MRH in 2019, is currently operated by MFG.

The Little Chef survived many incarnations of that company, but after Euro Garages acquired the chain this branch became an early casualty and closed in July 2017. It re-opened as a Starbucks shortly after. Meanwhile the old restaurant has fallen into disrepair, though a vehicle repairs business continued to operate in the newer building alongside until it ceased trading in 2021. The buildings are currently vacant.