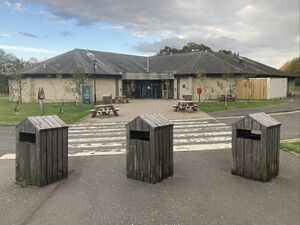 A small service area positioned on the B7078, parallel to the M74 between J11 and J12. Close to the motorway, but far from the bustle of ordinary life.

New owners Westmorland gave it a thorough refurbishment in 2018, including a new farm shop and restaurant and a change of name from its original title, Happendon.

First 3 hours free for all vehicles, after which cars must pay £8 per 24-hour period, caravans and motorhomes must pay £10 and HGVs must pay £14.

Prices can be paid in the Kitchen or filling station, with instructions in each car park. 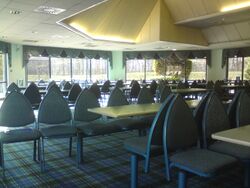 At the back of the main building is what looks like a small castle. This was a 19th century lodge called Cairnlodge, which formed the gateway to Douglas Castle. Douglas Castle was a mansion positioned several miles to the west, itself built in place of the original castle. The remaining lodge forms the emblem for Cairn Lodge, originally in blue on a white background (accompanied by its title), and now in white on a brown background. There is an additional lorry park next to the main service area.

Before Westmorland's refurbishment, the sign for the northbound services has a badly covered up hotel symbol, despite this site having never had a hotel. The sign was replaced with the new ownership, without a hotel symbol (instead with an equally badly covered up electric vehicle charging symbol)

A snack bar used to trade in the HGV parking area during the mornings however following the Westmorland takeover this was closed. The snack bar still remains but a banner has since been placed on the outside advising customers to use either the deli in the main building or hot food counter in the forecourt.

This was the first service area to open on this section of the M74, and it opened under the name Happendon services.

It was built by a couple who invested £500,000 into the site by selling their businesses and home and moving into a caravan on the site, even though they had to fight for another two years before they received confirmation that the service area would be signed from the new motorway. It was regarded as the first service area to be privately built without government involvement. The two later passed the business onto their daughter.

It took another £5m to get the service area up and running, using the brand name Cairn Lodge as the identity of the operator. The owners had looked at building other services in England, and said they ran Cairn Lodge more like a luxury hotel.

The petrol station was the first to open in November 1993, with car fuel branded Gulf and HGV fuel branded BP. The amenity building followed later, with an official opening ceremony held on 16 August 1994, opened by Ian Livingstone of the Lanarkshire Development Agency and Motherwell College.

Being independently owned, the service area stuck out remarkably compared with the other facilities on the road. The main amenity building used a series of buildings branching off a central area, much like other services being built at the time, but was clearly designed to handle large crowds. There are separate entries and exits for most units (toilets included) and a large restaurant.

At the centre of the restaurant, where the blue furnishings were loyal to its original design, was a large water feature. It also had a board telling the history of the site.

The quaint nature of the services made it suited to the former A74, which is the road the service area is actually built next to, although this doesn't carry a lot of traffic. Whereas just about every other service area in the country had been overcome by franchises and advertising hoardings, Happendon did things differently.

In late November 2014, Westmorland acquired Cairn Lodge for an undisclosed sum, and planned to only make minor changes to the menu in the café and product range in the shop for the time being. The takeover was the union of the only two operators who refuse to be overcome by franchises.

Westmorland's largely hands-off policy continued until early 2018, when Westmorland stripped the amenity building. A new café and farm shop opened on 13 April 2018, with a new main restaurant opening in December 2018. Unlike the previous '90s throwback styling, the new facilities are all bright and open, with a large fire replacing the old water feature.

Westmorland had always intended to drop the 'Happendon' title and push the 'Cairn Lodge' name instead. Strictly speaking, all service stations are supposed to be named after a place, but the rules in Scotland are slightly more relaxed. The final change was made in the summer of 2018, when the motorway signs were changed to call it 'Cairn Lodge services'.

Westmorland later acquired the petrol station from Shell, giving them complete control over the site. They kept the local staff and management on board with them during the takeover.

Scottish service areas are rarely included in service area assessments, but in 2021 it did feature in Which? Magazine's survey, which calculated a 69% satisfaction score. This was the third-best in Britain, losing only to other Westmorland properties.