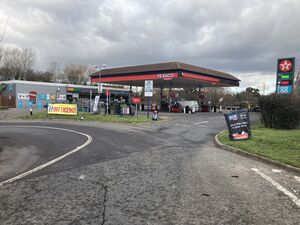 Signposted from the road? North-eastbound only

There are a whole host of retail options around the Braintree Bypass, including this service station. 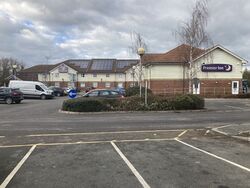 The Premier Inn hotel with its several extensions.

A service area was first proposed here in 1990 by Lawlor Land Co, which would have been a hotel with a leisure area adjoined to a "service area", but planning permission was refused.

Plans for the typical service station layout that is found here today came from a joint project by Esso and Whitbread in 1996, with them proposing a filling station, hotel and restaurant. The facilities opened the following year, with the restaurant known as the Mulberry Tree branch of Brewsters alongside a Travel Inn hotel, whilst the forecourt opened as a Texaco with a Star Market store as opposed to Esso in the original plans.

The restaurant later gained an extension in 2001, with the hotel gaining 20 additional rooms in 2005. The restaurant also changed to Brewers Fayre in the same year as the hotel extension. The hotel was later extended again in 2016, gaining a further 20 rooms.

The forecourt was purchased by Somerfield in 2007 who in 2008 demolished the existing sales building and upgraded the overall site. As a result of the site takeover, the new larger sales building opened as a Somerfield store. Following the takeover of Somerfield by The Co-operative Group, the store was rebranded to Co-op Food in 2010.

During late 2017, the forecourt was refurbished again with the removal of the car wash making way for a further extension of the sales building along with additional parking spaces. The new extension now houses a Subway store.