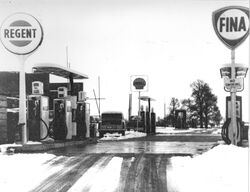 Both petrol stations were available on day one.

In our time online, we frequently see the same motorway myths being repeated time and time again. This page lists some of the most common myths about motorway services, and tries to explain where things have gone wrong.

The truth may not always be interesting, but it's still our place to provide it!

Myth: service areas are supposed to be on the motorway

Fact: it's not that simple. See: Offline services

Firstly, a building becomes a motorway service area when it signs a document with the highway authority, regardless of whether it's directly on the motorway it claims to serve or not. Secondly, while since 2008 the rules have discouraged building at junctions, since 2013 government policy has been very pro-construction, so they won't turn down any proposal without very good reason. To make matters even more complicated, the current highway design standards make it very expensive to create a new motorway exit.

Myth: services are not allowed to be destinations


Fact: this rule was dropped in 2013. See: Destination in its own right

Myth: The Pennine Tower was a revolving restaurant


Fact: the tower was never supposed to revolve. See: The Pennine Tower

In addition, the decision to close the restaurant is usually blamed on health and safety and/or fire regulations. While they were a factor, the restaurant was not very profitable anyway, and if it had been busier then money would have been put aside to solve the emergency access issues. 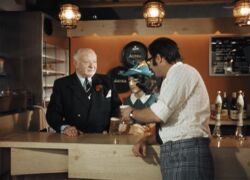 This motorway bar was alcohol free, but not all of them are.
❌

Myth: services are not allowed to sell alcohol

Many shops, restaurants and hotels at service areas have a licence to sell alcohol. Beaconsfield services famously has a JD Wetherspoon pub. That wasn't the first motorway pub though - there was an alcohol-free pub on the M1 at Trowell back in 1975.

Myth: services are owned or regulated by the government

Until the 1990s, the government owned the land that all motorway (but not A-road) services were built on. In keeping with the privatisation ethos, most of that land was sold to private companies. At the same time, the government argued that issues like prices, capacity, variety and standard of service would all be dealt with by free market economics. The Department of Transport did used to maintain some technical regulations, but in 2013 most of those were lifted.

Myth: services would make more money if they were all like Tebay/Gloucester


Fact: Tebay and Gloucester are famous precisely because they stand out. If that model was copied 100 times over, each individual site would not pull in very many people at all.

While people frequently comment that there is nowhere to get a good meal on the motorway - and it is true that there isn't very much choice at all - tests regularly show that a coffee or burger concession will attract a lot more customers than a full restaurant, not to mention that a restaurant is much more expensive to run. While Tebay's restaurant is incredibly popular with a certain audience, it's not popular enough to sustain more than a handful of branches (based on long-distance traffic flow; they may still do well by attracting local customers).

Myth: services in Europe do it so much better


Actually they might be - it's just difficult to compare.

European motorways are normally much quieter than British ones, so their service areas can provide a much more relaxing experience. Their customers are more likely to stop for a full meal, especially if it's a popular holiday route, whereas British motorways are used mostly by commuters in a rush. Most importantly, almost all European governments pay for the maintenance of their service areas, covering things like security, pot holes, gardening and litter picking. In Britain, the operator must pay those costs, and they then have to make that money back by filling the place with overpriced concessions.

Despite all of this, continental Europe has many terrible service areas too, even by British standards. 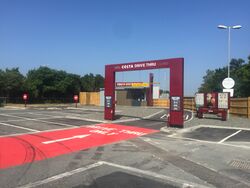 Motorway drive thrus have proven profitable and haven't yet received any major criticisms.
❌


Fact: No major road safety group or highway authority has commented on the drive thru coffee concessions opening across the UK. Even the environmental issues have so far been largely ignored.

The industry standard is to have any drive thru concession lead straight into a car park, and it is poor design to have it lead straight onto the motorway. However, there are no regulations against it, and as there is no law against drinking coffee while driving then the operators cannot be accused of encouraging illegal behaviour. The operators would argue that many of these customers would have bought coffee anyway.


Fact: It was always called the Clacket Lane site, which was in the Titsey Woods area. See: History:Clacket Lane

Many people have speculated that the name was chosen to avoid schoolboy sniggering, which was even reported by Roadchef themselves. The paperwork shows that 'Titsey Woods' was used to refer to that section of the M25, which was then broken down into three options. The chosen option was called 'Clacket Lane' from the start.

Fact: there is a man named after Heston services!


It is often claimed that chef Heston Blumenthal was named after Heston services. Heston (the chef) says that isn't true, so we'll have to take his word for it.

However, there is a man named Heston Harper, who co-founded electric vehicle charging company GRIDSERVE. His brother and colleague, Toddington Harper, told the press that the pair were both named after service stations. Heston (the businessman) hasn't denied it yet.