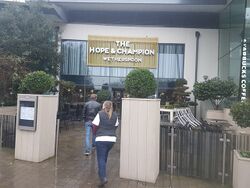 The pub at Beaconsfield services.

Between 1961 and 1994, motorway service areas were forbidden from selling alcohol. Many people believe that this rule still applies, but it does not.

Service stations are allowed to apply for a licence to sell alcohol but often they will not be allowed to allow people to consume it anywhere on their premises. These leads to signs being displayed which ban drinking alcohol "indoors and outdoors", leading to sarcastic social media posts.

Many service areas (both on and off the motorways) will sell alcohol in their shops. The motorway service area operators will tend to keep this quiet, knowing that promoting alcohol on the motorway will cause concern. The forecourt operators (who are more used to running petrol stations in town centres) are not so reserved, and will actively promote alcohol even at their motorway sites.

Famously, Beaconsfield services has a full JD Wetherspoon pub. It opened in 2014 and trades mostly on the food Wetherspoons serve, but the alcohol is available and they are expected to take the same precautions that any other roadside pub might have to so as to discourage drink-driving.

Moto introduced a pub-themed restaurant called Bar & Grill in 2015. This was mainly focused on selling food, but was trying to use the styling of a traditional pub.

PizzaLuxe will be opening two cocktail bars in November 2021, at Cambridge and Peterborough. These will offer made-to-order cocktail menu and full-service bar, and have been very open that they intend to turn the service areas into destinations.

The idea of a pub on the motorway isn't something totally new either. 'The Friar Tuck-In' opened at Trowell services in 1975, under the much stricter regulations at the time. This was entirely alcohol-free and was aimed at families as well as lorry drivers. It was designed in response to concern that many drivers, especially in lorries, had been bringing their own alcohol with them and drinking it during their breaks. The idea was short-lived and very little has been written about it.

The earliest motorway service areas were allowed to apply for a table licence. Newport Pagnell was the first to try, but the local licensing authority ruled against it, which set the precedent.

Only a year later, the licensing bill of 1961 outlawed the sale of alcohol on land that the government owned next to motorways. This created a loophole where operators could build a hotel on their own land next door to their service area, and the hotel could then operate without government legislation. One government report (dated 1966) found that the lack of alcohol was harming the success of the motorway restaurants, but it predicted that "eventually there will be a different social outlook" on drinking while driving.

When the motorway services were all sold off in 1992, a special rule was required to keep the alcohol ban going. When the regulations were rewritten in 1998, that special rule was forgotten. It's understood that this was a total oversight and wasn't supposed to happen, but after a while operators started applying for alcohol licences.

In 2008 the regulations banned the "sale and consumption" of alcohol again, but this only applied to new facilities on motorways. This was one of many regulations to be removed in 2013, meaning alcohol is permitted once more.

The Hope & Champion's status as a motorway service area created an unusual situation where it could remain open in the late stages of the COVID-19 pandemic, despite all other pubs in England facing a 10pm curfew.

These regulations have never applied to services on A-roads. Many Little Chef restaurants, for example, were licensed, and their menu included a note reminding people not to drink and drive. Pubs have played an influential role in the history of some A-road service areas, as they became important landmarks in the pre-motorway era and some continue to be positioned at key junctions today.