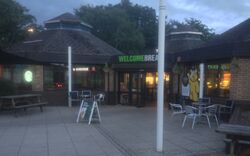 Like many services on the M4, customer levels have increased, but not by as much as at other services. As a result, Sarn Park managed to miss out on funding, with parts of it falling into disuse. Competition from a huge retail development opposite made growth particularly difficult as other services turned to takeaway facilities to balance the books.

As a result, in 2013 plans started for a new, replacement services, which were built during the first half of 2016. This aims to increase custom by being more appealing to visit, and to help with maintenance as the original building had reached the end of its useful life. In truth, the old building wasn't compatible with Welcome Break's new tendency to offer only fast food in a food court which has the same styling at all their sites.

Details on the first service area were scarce, except to say that it was a cause for embarrassment. It was Wales's first motorway service area, built by local firm West Park Hotels, who said they were going to incorporate the best of the English service areas.

The sub-contractor apparently ran out of money part-way through the project, and left it permanently unfinished. There was limited food and limited surfacing. What was available was opened by 1981. After several years of complaints, Granada showed an interest in the project, but operators were put off by the low traffic levels.

It was eventually taken on by Trusthouse Forte, who opened a full service area in May 1986. Their building design was also very unusual, taking advantage of the small footprint and low traffic levels.

It consisted of three octagonal buildings; one was later disused, one offered toilets, and one was a restaurant that was actually eight buildings and an extension all stitched together. The roofs on these buildings stood tall and draped low, creating a design which appeared to engulf the visitor.

In addition to the amenity buildings, there was a disused two-storey HGV MOT centre in the HGV parking area. There was also an RAC hut positioned outside. An early description suggests that temporary buildings were used before the octagonal ones were built.

The site was dug lower than the surrounding area to minimise noise disruption. Space was left on the roundabout for the hotel to be built on a separate site, which soon opened as a Little Chef Lodge. It has a long driveway connecting it to the main site.

Planning permission for the service area was originally granted in 1980, replacing the former East Glamorgan Hotel and isolation hospital. It included the option of extending both parking areas when necessary, but unusually this proved not to be required.

The site was initially branded Trusthouse Forte, with Little Chef being the main facility. In 1988 Forte merged their own brand with their Welcome Break brand, and Sarn Park became a Welcome Break service area. A leaflet dated a few years later said it had The Granary, Little Chef and The Shop. These progressed into Eat In, Starbucks and WHSmith. It remained a small building, and there was no space available for a game arcade, which further reduced its income.

Some of the road signs were still original to the site, and in 2016 still included directions for "Commercials" - a word for HGVs not used beyond the 1980s.

Until the M4 opened, all motorway services had been planned and supervised by staff in London. With the M4, that task was delegated to the Welsh Office, but to save time with what could have been a very long and complicated process, the Welsh Office merely invited interested companies to plan services wherever they liked.

Sarn Park was the second service area to open. Nervous about low traffic levels, they chose a small site next to a busy junction. Providing eastbound access was easy, but as the junction has become increasingly busy, the journey to and from the M4 westbound has become extremely complicated.

Even travelling east, the road design used to require users to complete a full lap of the services, before they can enter the car park.

Despite the complicated arrangements, the idea of using a small site by a busy junction should have worked. However, the open planning system meant there was nothing to stop rivals opening up nearby, and Cardiff West and Swansea West did exactly that. As a result, Sarn Park never really reached its full potential, which is why the old site became desperate for investment.

The hotel remained a Welcome Lodge until December 2006, when it was given a £400,000 refurbishment. The new name, "Days Inn Bridgend-Cardiff", received negative media coverage as it implied Bridgend was merely a suburb of Cardiff. 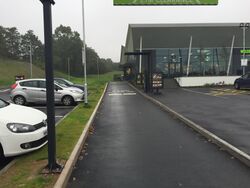 The new amenity building and drive thru.

With the slip road running horizontally through the middle of the site, the redevelopment saw the amenity building and car park moved from the south side to the north side. This was to allow the old building to remain open while work took place.

The new, square building, has a large zig-zag roof stretching well over the front of the building to create a small terrace. A Starbucks cafe with WHSmith behind it are on the left of the concourse, with Burger King on the right. The public toilets, game arcade and deliveries area is on the back wall.

Space has been left for a concession in the lobby, possibly Top Gift, and another in place of the picnic area if necessary.

As the site is on a down-hill, the front of the building is well above the car park, with steps leading up to it. A Starbucks drive thru is included with a single window at the back.

As part of the works, a new Shell garage will gain a small Waitrose-branded retail store.

Although the swapped parking areas both offer more spaces than they used to, much of their alignment remains the same, with kerbstones being recycled.

A Subway store was added to the main building on 12 August 2021, in space left empty next to Burger King.