A filling station and former Little Chef at the top of Detling Hill as the A249 climbs out of Maidstone. 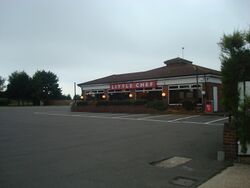 The Little Chef at Detling.

The site here started out as a dwelling called The Highlands. This gained Highland Garage next door in the early 1960s which later gained fuel pumps being supplied by National in the late 1960s, and Hilltop Garage which was a car sales showroom and home to the Detling Motor Company.

The car sales showroom became a Happy Eater restaurant in 1981, which in 1996 became the Detling branch of Little Chef. The forecourt received a refurbishment in 1986, providing new facilities and a new sales building, at which point the branding changed to Shell. A road maintenance depot was also added behind the garage, and is accessed through the eastbound services.

The restaurant soldiered on until 2011 when it closed and was bought by local restaurateur Michael 'Mickey' Schembri, who transformed the site into Mickey's Rock Diner. The site was later rebranded to Bangers Diner for a few years before reverting back to Mickey's Rock Diner. Following the passing of Mickey Schembri, the diner changed to Detling Diner A249 in August 2021.

A counterpart, westbound Happy Eater was also built a few miles east of here at Stockbury in the late 1980s. This became the Stockbury branch of Little Chef in 1996, before closing in 2005. The restaurant went onto become Porkies Diner in 2005, then Lily Spice, then Hot Cuisine, then Newport Imports American car sales showroom in 2013 and finally Royden's car sales showroom in 2016. In 1990, BP planned to add a filling station, tourist information centre and picnic area on the other side of the access road to the restaurant, but this was refused planning permission due to the impact on the Kent Downs AONB that the land is part of.

There is also a filling station on the westbound side opposite this site, with the pair collectively taking the Highland Garages name, but this isn't signed.