Very small services located off the M6 at J16 and at the end of the Stoke D-Road, for traffic on the A500. The services do not allow lorries, but on both sides of the A500 on the other side of the motorway is a large lay-by which lorries tend to use instead. 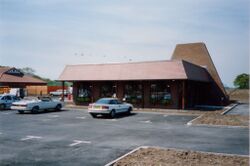 Cheshire East Council have designated Radway Green Road as a potential new employment area, and have suggested they would like to see the service area expanded with additional facilities.

This service area was built by Kelly's Kitchen in partnership with Petrofina, who were attracted to the area following the competition of the Barthomley Link. They initially called it Barthomley services, though it would become known as their Crewe branch.

The first plan, drawn in 1987, had a smaller restaurant positioned next to the A500. A revised plan, dated 1989, had the restaurant in its present position, in a larger building with an overhanging roof and a tall chimney. The hotel was now labelled 'Highway Lodge'.

Around the time that the service area was due to open, Kelly's Kitchen and Highway Lodge were purchased by Trusthouse Forte who re-branded the restaurant as Little ChefHistory. The Highway Lodge became the Barthomley branch of Forte Travelodge. The rebranded facilities opened in December 1990.

After Granada purchased Forte, they added a Burger King to the Little Chef. This closed a few years later (with Burger King signage still visible but covered up), but it re-opened in 2012. As the Little Chef brand became to rapidly decline, this became their only branch which was close to a motorway.

The Fina garage became Elf, and then Total. In 2012 the Total garage changed to Shell.

Euro Garages became the owners of Little Chef in 2017, with the rights to use the brand name for a year. By January 2018, their time had ran out and they changed the restaurant to EG Diner. On 20 May 2018, the Burger King and EG Diner restaurants closed. The EG Diner was replaced by a KFC Drive Thru, which involved a refurbishment of the current building and a drive thru lane being built around it. This opened on 12 September 2018. The Burger King was replaced by a Greggs store which opened in October 2018.