Services Which Have Changed Direction

This page was written in 2009. Developments referred to may have changed since - follow the links for the latest information.

As the motorway network has developed and changed, so have many of the motorway service areas that were built to serve it. This page charts some of the most significant changes which have happened. 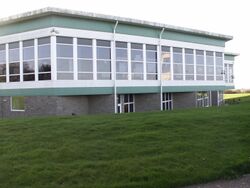 Perhaps the most iconic of those to be featured on this page, Aust is now better known by its Sunday name of Severn View. This is where the problems begin.

Severn View suffered probably the biggest and most well-documented fall from grace of any service area, in being moved from a busy and popular location looking over the Severn Estuary to, following a drop in trade, a small shack in the old lorry park. This was always going to be a downwards spiral because, with no-one wanting to go past in the first place, it was going to be hard to attract more people to an increasingly poorer site.

Arguably this is the most painful disaster ever to befall a motorway service area, but it is also perhaps the most necessary. It all happened despite a series of leaflets trying to encourage people to visit this majestic service area, the sort of thing not seen since the late 1960s.

There are hundreds of buildings across the country which were at some point part of the Little Chef chain. Many of these, like Barnsdale Bar or Sutton Scotney, had large buildings which became surplus to requirements. Most have been upgraded and expanded, but Musselburgh and Markfield stick out.

At these two, the main restaurant building has been abandoned, but the site itself continues to trade as a petrol station. This means there is evidently some demand for the site to be used as a service station, yet nobody thinks it would be busy enough to bring the main building into use. 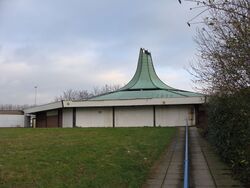 Burtonwood westbound after it was closed.

A triumph of optimism over practicality, Burtonwood became known for a long time as "that half-derelict place near Liverpool". It was an early sufferer of Severn View Syndrome, where people would actively avoid it, meaning Welcome Break felt inclined to put few resources into it.

Eventually the westbound side was finally kicked into the grass and, after being left abandoned for a while, was demolished. All customers are sent to the eastbound side in a project referred to as "consolidation of facilities". This lit the path for a complete refurbishment which offered significant improvements. The old building is now a business park.

Technically, they built this one twice, but the important thing is that this is another one that has gone from two overgrown buildings to one tiny one.

Whether or not the new building meets people's needs is irrelevant, the fact is it's only a shadow of its former self. A bit like Severn View, only here the old building isn't watching over from a menacing vantage point.

We used to write at great length about some closed services here, but then we decided to create a whole section for them.

Those that were so good they built them twice

"...more dynamic, efficient, sustainable and enjoyable to be within. [This is] a building in tune with the 21st century."
Moto, Cherwell Valley mk. II

What do these five have in common? They were all burnt down. In the long term this seems to have been quite convenient, as it allowed them to be replaced by something which, according to the planning statement, was umpteen times better.

Heston is a bit of a joker in the pack in that it was re-built so long ago that it's now elderly again. The others are still doing their job.

It happened to Northampton and the two new buildings still seem to be serving it now, and have saved Roadchef refurbishing them several times further down the line. 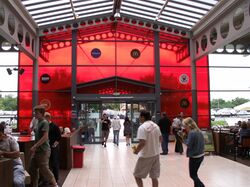 Inside the newer building at Strensham.

The southbound services echo Northampton's story but the whole northbound side was actually picked up and moved half a mile up the road, in order to make more space as it was dangerously close to the previous junction. If at first you don't succeed...

The two sides at Strensham were rebuilt different times and it shows. Even so, this means Strensham can claim to be one of the oldest services around (construction on it started before any motorway service area had opened) and one of the newest.

Roadchef have a penchant for rebuilding things, and there are rumours that Watford Gap is next on their target list.