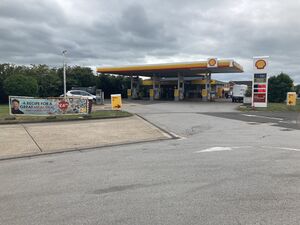 Caxton Gibbet isn't strictly a service area - it's a notorious roundabout which has attracted a number of facilities. Nonetheless we receive a lot of queries about it, so it is detailed here.

The main Caxton service area is positioned to the west of the roundabout.

Caxton Park is positioned on the A1198. No HGV access is permitted.

Short stay customer parking is provided in both sites.

Parking at Caxton Park is limited to 2 hours maximum stay and is strictly enforced by MET Parking.

No HGV bays are provided, but HGVs can access the Shell forecourt. 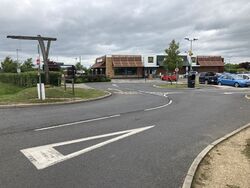 Historians will know that this seemingly innocuous eating place has a dark past.

A 'gibbet' is a tool used for public executions. It's thought that the Caxton Gibbet, positioned on Ermine Street, was used to shame murderers in the 18th century. There are many folk tales about possible The gibbet itself was removed, but a replica was built in the early 1900s.

This crossroads became an important junction, where the A14 met the A45. The Caxton Gibbet Hotel was built in the south-east corner, later known as the Gibbet Inn.

After the roundabout was built in the 1950s, a number of petrol stations were attracted to the area. One, called Gibbet Filling Station, was positioned north of here. It opened in 1958 and was branded Nafta. Little Chef applied to build a restaurant here in 1961, but ultimately it didn't happen. Highway Restaurant opened instead, before closing in the 1970s. The land is now a hotel.

To the west, there was a petrol station on either side of the road. Together they were known as Station 45, or variations on that name. Little Chef turned their attention to here in 1979, opening their restaurant in around 1984. The forecourt was rebuilt by Shell in 1982.

Despite its opposite number appearing to do well, the eastbound petrol station had closed by 1992. It became a hand car wash. 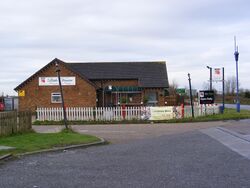 The Little Venice restaurant, pictured in 2012.

The Little Chef kept trading until 2007. It reopened as Little Venice a few years later, and then closed again, becoming Costcutter.

Meanwhile, the Gibbet Inn had closed in around 1994, and became Yim Wah House Chinese restaurant. The direct access from the A45 was removed, and a new car park was provided. The restaurant was severely damaged by a fire in 2009, and did not reopen.

In 2012, work started on demolishing the former Gibbet Inn, and replacing it with a series of restaurants, in a development named Caxton Park. The replica of Caxton Gibbet is still provided outside the entrance, with little fanfare. It is the start of much larger plans to develop the land all around here.

The Costcutter store was rebranded to Premier in February 2021, gaining Costa Express and f'real Milkshakes machines. f'real was later removed.

Caxton Park often tries to call itself a service area. England's national highway authority plans to replace the current A428 with the new A421, which will require traffic to exit to access Caxton Gibbet and therefore turn it into more of a destination. These plans also refer to the place as a service area, but this appears to be colloquial rather than a formal designation.