Signposted from the road? From A180 only

The newly rebuilt service area at Barnetby Top is positioned at the roundabout at the end of the M180, but primarily serves the A180. 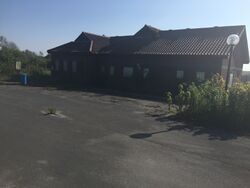 The site is signposted from the A180 and visible from the M180, but it didn't qualify to be signed from the motorway.

Initial proposals for the site were for a hotel in 1977. These plans were renewed in 1981 and 1984 when a filling station was added to the plans.

The service area eventually opened in around 1990, with the common A-road pairing of a filling station and the Barnetby Top branch of Little ChefHistory. The restaurant was housed inside a building with a pitched roof, double front and red bricks which stood facing the eastbound M180 exit slip road. The interior of the restaurant had darker wooden dividers and wooden beams on the ceiling.

The forecourt was previously owned by Malthurst under the Jet brand. In the early 2010s, the site was acquired by MRH who rebranded the site to BP. To MRH and their successors, it was known simply as 'Barnetby services'.

The Little Chef restaurant closed in February 2012, along with 66 other poorly performing sites. The restaurant was then left abandoned for a number of years following its closure.

Work began in January 2020, with the refurbished BP forecourt opening in August 2020, housing a Londis store and MFG's first 'food to go' concept, which included multiple grab and go food and drink options. The original plan had included a Greggs store, but this was replaced with the grab and go options instead. The Starbucks Drive Thru then followed, opening on 24 August 2020 and operated by Kbeverage.

MFG currently hold planning permission to install one of their 'MFG EV Power' electric vehicle charging hubs here which is set to include 8 chargers. These are expected to be installed during 2021.