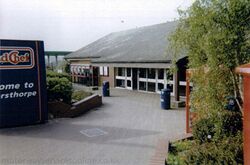 At one point, Rothersthorpe (now 'Northampton services') could have been the first service station ever built in the UK. Instead it had to wait 20 years, at which point it opened but didn't last very long. Here's the sad story.

When the M1 was being planned, Rothersthorpe was one of five possible service stations which were shortlisted to be built. Businesses were consulted for advice and it was decided that the two neighbouring services should be built instead, with Rothersthorpe cleared and ready to build as soon as the others become overloaded.

As a result, as the M1 was built, land at Rothersthorpe was purchased for a service station. A footbridge bridge between the two sides was built - there is an argument that the bridge was never a formally approved part of the project, but the whole process was rushed. In the south-west corner, the Ministry helped themselves to some land to use as a works unit. Emergency access to Banbury Lane was provided. 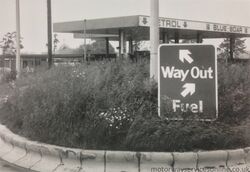 Already several mistakes had been made. All of the service areas built so far were far too small, and immediately became overloaded. However they didn't want to admit that they were overloaded, because that would be inviting a competitor to be built next door.

Eventually the government decided it was time to build Rothersthorpe, and held the usual open tender process. Normally Blue Boar should have been forbidden from entering as they already ran neighbouring Watford Gap, but it was felt they had such a raw deal with Watford Gap being so small that they should be allowed to enter.

Rothersthorpe would not be any better. The land was just as small, the existing bridge had to be factored into the layout and the works unit occupied a lot of space and dominated the landscape. The invitation to tender stressed that this would be a difficult site requiring experience.

Blue Boar did win the tender, and decided to operate it as an overflow for Watford Gap, aimed mainly at lorry drivers. Cars and lorries parked in what was effectively the same expanse of tarmac, with lorries getting the row at the back.

Blue Boar built a small, brick building on either side of the motorway, soon described as "austere" and "stark". The buildings faced a number of planning difficulties, and the development cost £1.4 million.

The petrol stations were the first to open and only had a few pumps, and a long, thin sales building with a small front in the middle of the concrete. In between the southbound building and forecourt was a garage used by Blue Boar.

The northbound building had an overhanging roof which made it look very low; it was further shielded by a few trees by the entrance. Inside was a foyer, with the shop on the left, toilets on the right, and entrance to a diner called Mae's Diner on the far right. Ahead was a small arcade and the steps up to the bridge.

The southbound building was much taller, with a large restaurant on the second storey. It had glass doors at the front but was otherwise filled with square windows, and a chimney stack at the back. At the time of the survey (dated 2000), the servery was next to the road and male toilets were next to the stairs. Female toilets were downstairs, next to the game arcade, with the shop and offices opposite. The area occupied by both toilets and the kitchen/offices looks like extensions. The arcade was built in 1993.

The larger southbound building was scheduled for opening on 16 July 1979. New problems arose on 9 March 1979 when the existing footbridge developed a "severe crack", which needed the M1 below to be closed for emergency repairs. The poor state of the bridge northbound customers wouldn't be able to walk across to the more extensive southbound facilities. A new bridge was provided several months later, which integrated into the main building.

The two hour free parking limit was introduced nationwide a few years after Rothersthorpe opened, and this tiny service area was the only one to not to allow anybody the option of paying to stay longer, which pushed lorries back to Watford Gap.

There was a plan to build a hotel here but it was refused.

In 1986, Which? said the restaurant was "small but cheerful", and that the services were "drab but clean". Inside it was very dark, with lots of wooden fittings and white/dark blue walls.

When the site of the services was identified, there was a railway crossing the motorway to the east. The railway was dismantled in the 1970s.

In October 1983, 70 staff at the service area were made redundant as the place was to be closed for six weeks to allow for "repairs" to the motorway. It's not clear why such an extended closure was necessary when so many other motorways have been repaired without closing service areas.

In 1983, plans were drawn up to build the new A43 Blisworth Bypass along the route of the old railway. This initially caused some concern that the service area could be impacted. The new road opened in 1988, and included an interchange with the M1.

The new interchange involved link roads on either side of the M1, which wrapped around the outside of the services. Now that the exit was serving more than just a service station, the four slip roads had to be re-aligned. This inadvertently gave Rothersthorpe a lot more space to play with, and the land was formally transferred to the service area. Some of the old slip roads can still be made out, although subsequent construction has masked a lot.

The new north/west-facing slip roads cut across the two exits to Banbury Lane. These tiny lanes were blocked off and left to be taken over by nature, and are now impossible to get down. A short section of the northbound access road had a motorway maintenance building built on it, and a gravel track along the line of the road out of the services still exists to access this building.

Despite the new junction, the service area retained its original online design, meaning visitors can, if they like, choose which whether they use the northbound or southbound facilities regardless of the direction they were travelling in. 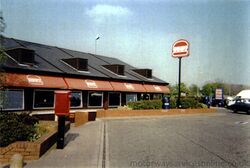 The northbound diner with Wimpy branding.

Blue Boar were purchased by Roadchef in 1998. They rebranded the shops RoadShop, and the northbound restaurant Wimpy - the whole building was given Wimpy branding and at first glance it looked like a stand-alone restaurant. The garage was now ran by local recovery firm Cowans.

In 2000, Roadchef proposed significant work at the services. On the southbound side, they wanted a Costa and a restaurant downstairs, with a larger shop, arcade and toilet facilities. Escalators would have taken customers up to the first floor where there would have been two retail units and a larger restaurant - name not given but Wimpy and Dr Beak's Chicken would make sense.

On the northbound side, Roadchef were planning a much larger shop, a secondary retail unit, and for the restaurant to be totally demolished and replaced by a new building with a servery (most likely Foodfayre) and a Costa. This building work never happened, and instead Roadchef worked on something much bigger.

Starting in about 2002, Roadchef demolished the northbound Wimpy. In place of this and a lot of the car park a new amenity building was built. This allowed the rest of the old building to be demolished, which made space for a larger petrol station. The car park was expanded into the old exit slip and lorry parking, and new lorry and coach parking were built outside the previous boundary.

This was soon followed up with a similar project on the southbound side. The former Cowans garage was demolished and this, along with the grass area and the car park, were used for the new building. Lorry parking was moved to the old motorway exit slip while new coach parking was built by the building.

The petrol station was demolished and re-built with something larger, taking advantage of the former garage parking and the rationalised road layout. Now the old southbound building could be demolished, allowing for more car parking spaces. The police patrol building next to it survived unscathed, and now looks a little lost with all the expansion around it.

The new buildings were given a new name; Rothersthorpe was dropped and from now on it was called Northampton services. To demolish the footbridge would have required the motorway to be closed, so instead it was left in place for staff use. It is higher at the southbound end, reflecting the fact it used to meet a two-storey building on that side.

The new buildings were large shells with curved roofs, discrete entrances and large, glass frontages, although there still isn't much space for landscaping. Inside was mostly occupied by seating, with a Costa stand on the right and a counter at the back with a Wimpy and a restaurant servery. At the rear-back was a corridor with Fonebitz and 'Formula One'-branded shops.

This layout was largely maintained for several years, but in 2015 the northbound building was extended to direct customers past a new SPAR shop. This was a trial store, which Roadchef later rolled out nationwide.

As of 2021, some internal documents still say the site is owned by Blue Boar.