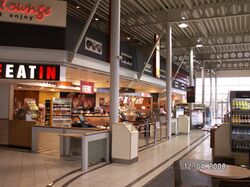 When the southern part of the M42 was planned, the first motorway service area was expected to be near Solihull. Very little was written about possible service areas on the southern section, but in the late 1970s some documents did suggest that one could be built at Portway, at M42 J3.

The M42 here didn't open until 1986, and in 1992 the Department of Transport ended their involvement in motorway service area planning. They published a list of projects they had completed "preliminary work" on, and while most of the items on that list were specific service area names, one of them merely said "M42 South". No detail of that preliminary work has been uncovered.

Individual developers were encouraged to pick up where the DoT had left off, and in 1994 Bryant Homes submitted a planning application for Hopwood Park services. There were local complaints and it was rejected. John Prescott overturned the rejection as Environment Secretary, allowing the plan to be developed by Welcome Break.

One alternative plan, drawn up in early 1998, took up a similar area, but with a less contemporary design. The access would have been off a new roundabout on the A441, with a petrol station at the north end. The cross-shaped building would have been in the centre with a fan-shaped, landscaped car park facing east, by a motel and balancing pond.

"Judging by the comments, we are probably among the best in the country."
Manager Neil Austin, 2000

Hopwood Park was opened on 22 August 1999 by TV chef James Martin, and it cost £25 million to build. Its design is very similar to that of Oxford, which was opened at roughly the same time, and South Mimms which was rebuilt at this time following a large fire.

However, Hopwood Park was a little different: boosted by an on-site nature reserve and an enthusiastic manager, it became one of the first services to really challenge the negative perception of motorway services. The manager invited critic Egon Ronay, and welcomed Central TV when they wanted to produce a fly-on-the-wall documentary. The service in Red Hen was praised particularly.

The facilities it had from opening included a McCoys shop, and another shop called Lifestyle. The drainage system, known as SuDS, was one of the first of its kind in the UK, and a sign in the car park explains how it works.

Hopwood Park was the first service area to get live traffic information, as part of a joint trial between the Highways Agency and Welcome Break.

The site won Best Provision of Group Facilities in 2005, the first time a motorway service area has ever won such an award. The Coffee Primo unit was also been nominated for 'Best Beverage Experience'. The next year, Holiday Which? rated the services as 5/5. They said it had helpful staff and a good variety of food in a smart café, but it didn't win, Tebay on the M6 did.

When the Waitrose store opened here, it replaced the Petroleum Menswear store. Hopwood was one of few services to have an individual outlet operating within it. The filling station also used to have a Waitrose store within it (the only forecourt Waitrose store on the motorway network), but this was later replaced by the standard Select/Deli2go combination.

A Starbucks Drive Thru was added to the car park in August 2016, after being scheduled to open in late 2015. The site was also one of the first three motorway service areas to gain Tesla Superchargers in July 2015. 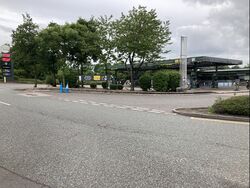 The new-look petrol station, which has since been rolled out across the Welcome Break estate.

Petrol station operator Applegreen took control of Welcome Break in January 2019, which saw their business strategy to attract customers with cheap fuel cause other operators to take note. There had been rumours that the takeover could cause a motorway price crash.

The following July, Applegreen removed Shell and its associated brands from the petrol station at Hopwood Park only. It was replaced with colours and slogans very similar to Applegreen's, but with Welcome Break's name instead of Applegreen. This became one of the only times in the last 30 years where a motorway petrol station has been prominently displaying the operator's name, rather than a supplier like Shell's.

The change was backed up by a large sign promoting "lowest motorway fuel prices": not as cheap as local petrol stations like some had expected, but still cheaper than what it had been. This was followed by a large online campaign focusing on the prices and the quality of the fuel.

The trial was deemed successful throughout 2020 the new look forecourts were rolled out across the Welcome Break estate, ending their long running relationship with Shell. During the same year Hopwood Park's rival, Frankley, was granted permission for some bespoke road signs on the motorway advertising the price of its fuel. Frankley soon revealed that it was dropping its fuel prices too to compete with Hopwood Park. In early 2021, Hopwood Park requested the same road signs, so that it can tell passing motorists that it's competing too.