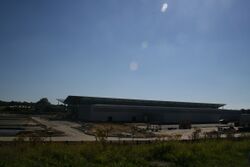 Records of Folkestone services go back at least as far as 1970, where Kent County Council recommend a motorway service area be built "near Folkestone" once Maidstone had reached full capacity. In 1972, the Department for the Environment confirmed their intention to build a service area on the M20 at "Stanford". The subsequent delay is largely down to the fact that the M20 had a large gap in it until 1991 - until then this part of the road was never more than 14 miles long.

The Department's study was also delayed by the need to wait for more detail about how the Channel Tunnel would connect with the M20. Given that as of 1972, motorway service areas were still very rarely positioned at roundabouts, it would be reasonable to assume that the Department had intended to position the service area slightly west of where it was eventually built, even if no location had officially been mentioned.

Building a service area closer to Sellindge was considered but ruled out as the Landscape Advisory Committee would object.

In 1986 the Department of Transport began work on planning for the service area, which they called Westenhanger. Progress was delayed by the fallout from the High Court case over Clacket Lane, which criticised the Department's procedures. They opened it up for bids to build it in 1992, and later remarked that they had received replies but "none were acceptable".

Later in 1992 the responsibility for planning new service areas was moved from the government to the private sector. At Westenhanger, the Department of Transport said they had undertake "preliminary work", and would let the private sector decide what they would do next.

In 1993 Three Kings Developments Ltd had a plan to build Westenhanger services approved. The Highways Agency later confirmed that they had signed a Traffic Signs Agreement, which meant they approved of the service area and were expecting work to start soon. The site then fell into the hands of Stanford MSA Ltd, who leased it to Thornfield, and then when they lost interest, to Henry Boot Developments Ltd. Others named in planning documents are B D A Partnership Ltd, Christiani & Nielsen Ltd and Hamilton Associates Architects Ltd.

Henry Boot's detailed plan, dated 2005, was the one which was eventually built, with an opening scheduled for November 2007. A condition of planning permission was that free use of a tourist information centre had to be provided.

Internally, Henry Boot had described the site as "a mixture of retail and motorway service area", with additional trade arising from an agreement with P&O Stena Line to have coaches change drivers here. The intention was to have check-in desks for the ferries and Channel Tunnel too. The amenity building was to be the largest in the UK.

The size of the service area which had been allocated to retail breached government policy. The Highways Agency didn't pick up on this until 2005. They later explained that the issue "slipped through the net", as the policy had changed before the agreement was renewed.

As a result in 2005 the Highways Agency refused to renew the outstanding Traffic Signs Agreement, but they did agree to work with the developer to promote the site as a port facility. The Highways Agency suggested that services signs should be provided, but that they should have no name and no operator. This was agreed in September 2005. The Highways Agency later reduced the number of additional signs they had offered to place along the M20.

The retail size regulation was removed in 2013, and standard road signs appeared in 2014. 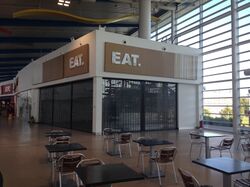 The service area officially opened on 9 January 2008, but it actually opened with a dry run a few days earlier, at which point no road signs had been put up. Many of the units didn't open until a few days later.

The hotel, a Days Inn, had been scheduled to open in autumn 2008, but it was never built. The road signs included a bed symbol which was never covered up. Meanwhile Shell had bid to run the petrol station; they were outbid by Extra, who would go on to run the facility and lease it back to Shell. The KFC is operated by Caskade.

Many tenants have moved in and out over the years. One of the more surprising entrants was Wimpy, given that it had been removed from just about every other service area (although this one was company-ran). That store was removed in 2013 but signs on the entrance road were still displayed until a site signage refresh in 2017.

One of the tenants, Muffin Break, revealed that they had been promised "88,000 visitors a week". The figure was described as "wildly optimistic" in a 2010 High Court case, which looked at the promotional material's claims about visitor numbers and road signage. Henry Boot argued that the inaccurate prediction had hurt them more than any of their tenants.

Actual visitor figures were about 10% of the prediction. This was put down to the consultancy failing to appreciate that it was too close to the end of the road, to them paying too much attention to the "unique" appeal of the site, and to confusion about the site's status as a motorway facility. The place was described as a "commercial failure". Muffin Break's case was dismissed on the grounds that the contract was deemed to be fair.

Regardless of the legal issues, it is fair to say that the building here is very large and manages to feel empty at any time of the day. Ferry departure information wasn't possible to provide, and no check-in desks were present. Trade has since increased marginally, perhaps owing to the new road signs.

For the first couple of years ("the ambiguous years" if you were looking for the road signs), there was a lot of confusion about this place's name.

Stop 24 promoted it as "Stop 24", but that is just brand and not a geographical name. Extra and some Henry Boot documents called it "Folkestone". The Department of Transport had previously called it "Westenhanger", which was still the name used by the council and by residents. In the 2000 Traffic Signs Agreements, the Highways Agency were going to have the signs say "Stanford services". When it opened, they published a news release calling it Saltwood!

In a meeting in April 2004, the Highways Agency pressed the developer for the name of the service area, and were told it was provisionally "Stop 24". Around this time, a new "Services" sign was placed on the M20 westbound 1 mile prior to J11, which was covered up but appeared to confirm that the operator would begin with an S.

In the face of that much confusion and the few road signs which had been provided simply calling it "Services", back in 2008 Motorway Services Online made an editorial decision to refer to it as "Folkestone services". In 2014, the Highways Agency finally placed road signs calling it "Folkestone services", and other sources began to use that name. Perhaps misguidedly, we like to take credit for having influenced this.