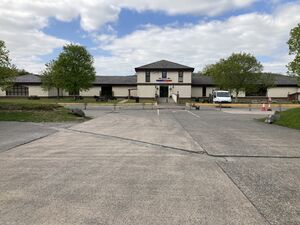 The long-standing Carnforth truckstop is now an independent facility located at the end of the spur road off the M6. The site is signposted from the M6 and A601(M).

Prices are paid in the shop or restaurant, and can be paid using GBP, Euros, using fuel cards or SNAP.

Carnforth was the last remaining part of the larger Truckhaven business, which provided a number of truckstop facilities across the UK, including in West Bromwich. The Carnforth site is now independent.

The facility was initially provided for HGVs only, but was soon allowed to serve the general public. Between 1996 and 2006, Truckhaven held planning permission to build a restaurant and petrol station for cars on the opposite side of the roundabout, next to the railway line. This was eventually refused for being a greenfield site.

The road signage in this area is rather unusual. The signs on the M6 look like those for a motorway service area, but have no words. At the time there was no policy for handling motorway truckstops. A black sign for motorway truckstops was later introduced, but when the Carnforth signs were replaced in 2015, they were replaced like-for-like, with more incorrect models. Even stranger, the A601(M) only uses the brand name 'Truckhaven', while the A6 treats it like a local service area.