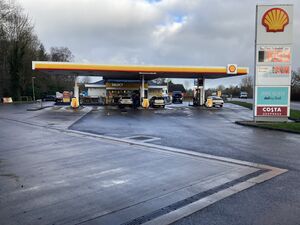 A5 and A483 between Oswestry and Ruabon

The northern one is positioned at the Gledrid Roundabout making it accessible to both sides. It has a large lorry parking area known as Chirk Truckstop.

Short stay HGV parking is available at The Lazy Kettle and is free for the first 2 hours after which HGVs must pay £22 per 24 hour period.

The northbound forecourt opened as the Moreton Bridge garage in the 1940s, and by the 1980s it had moved slightly to replace an ancient property.

The Weston Rhyn branch of Little Chef was added to the north of the filling station in 1990, at which point it became a formal service area. The forecourt was branded Shell from this point.

The restaurant closed in 2005 and went onto become Canalin Café, followed by Cinnamon Indian restaurant. It is now a hand car wash.

The newer roundabout site was first proposed in 1989 as a full service area. A filling station and truckstop were proposed in 1993, and the site was built in around 1997 by James Pickstock Limited. This wasn't regarded as an official service area by the highway authorities, and wasn't signposted from the road.

A drive thru restaurant was also proposed to join the filling station but this wasn't built. James Pickstock were granted planning permission for a KFC Drive Thru and OK Diner to be built on the unused land to the south of the filling station in 2007, but these were never built.

The forecourt opened under Total branding. It was soon sold to BP. In the early 2010s, it gained a SPAR store.

In early 2016, the filling station was purchased by BP Express who redeveloped the site. The site reopened on 24 August 2016 with a M&S Simply Food store and Wild Bean Café. A Traffic Signs Agreement was signed with Highways England and formal road signs were placed on the A5 southbound.

The land to the south of the filling station to this day is still unused and is currently advertised to let.

Gledrid was expected to become a BP Pulse electric vehicle charging hub in 2021, but it's believed that this project has been postponed.