Traffic information being provided at Birch.

Following a trial at Hopwood Park, the Highways Agency installed traffic information points at most Welcome Break services. They display information from the Traffic England website on a touch-screen board.

In late 2009 large screens were installed at all Roadchef services, but these were not interactive. Since then this appears to have been scaled down - most services, Costa outlets and airports have traffic information points displaying information on local incidents, travel times to important interchanges and alternating between traffic cameras, but these are not interactive.

The Highways Agency changed its name to Highways England and then again to National Highways. This style of information is still provided, as well as information boards where appropriate, but the interactive boards have gone. As a result, there is no longer any particular name for the information points. 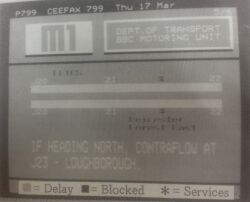 Looking at it today, it's amazing anybody understood the CEEFAX map

In August 1987, the Department for Transport set up TV screens at Scratchwood, Newport Pagnell northbound, Rothersthorpe and Watford Gap. These screens were set to BBC2, CEEFAX page 799, which provided traffic information from the BBC Motoring Unit. An additional monitor at Toddington was a more complicated set up which displayed advertisements.

The CEEFAX channel showed a rudimentary map of the M1, highlighting any disruption along the way. The trial was well received by motorists but not rolled out in this form. On request, local weather information was added too.

The monitors were usually placed in the restaurants, as managers feared a crowd would form if they were in the lobby.

There had previously (in 1969) been a proposal to trial playing a cycle of seven minute road safety films on TVs at Toddington. It's not clear if this happened.