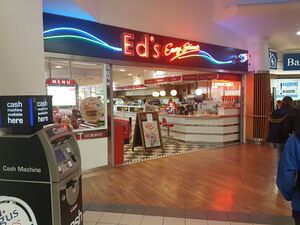 Ed's Easy Diner is an American diner chain who serve American specialities and breakfasts. They have several diners at shopping centres and stadiums across the UK and were first announced in October 2015 to be introduced to Extra's service area at Peterborough on the A1(M).

The following month, It was announced that Welcome Break had signed a partnership deal with Ed's Easy Diner with the first diner opening in April 2016 at South Mimms. More were expected to open after the trial, but instead in April 2018 the branch closed ready to become PizzaExpress.

American-style dining has a long history at motorway services, with the most famous example being Little Chef. With Ed's Easy Diner, it appears to be an easy way to tackle the high demand for breakfasts in the morning, while keeping a popular menu of burgers, milkshakes and deserts in place the rest of the day.

It is also an established name known for catering with families.

Extra closed both of their diners at Cambridge and Peterborough during 2019 following Ed's getting into financial difficulties.

Ed's Easy Diner used to be found at the following service areas: