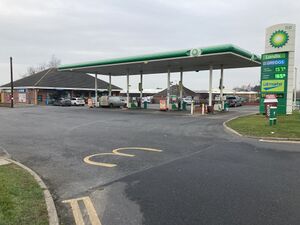 A1079 and A614 at Shiptonthorpe Roundabout

The roundabout at Shiptonthorpe has its own small service area.

The service area was built in November 1972 as a petrol station and one of the early branches of Little ChefHistory. The building was painted bright white and red, and had a flat roof with a very angular appearance. While Little Chef called it Shiptonthorpe, the pairing was known as 'Coastways service station'.

Incredibly, despite the old building, the Little Chef continued in service until 2007, when it was selected for closure. A Burger King had been added to it in the '90s, but that later closed. The Little Chef then reopened in 2008 as part of the brand's planned comeback, but it closed again when Little Chef held more cutbacks in 2012.

In about 2013 the restaurant was modified significantly by McDonald's, who provided a new exit to prevent traffic from having to turn right across the A1079. A few years later they built a larger car park in the adjacent field.

By now the A1079 past the service area had a very poor reputation. It was replaced by the new road in 2020, turning the old road into a quiet cul-de-sac. To avoid confusion, signs all around the roundabout gave "Services" as the destination along the old road.

The forecourt was demolished in 2003, as it was also looking antiquated. It had a tiny sales shop in the centre. The new building is much larger, but took away most of the parking. In November 2019, the forecourt was refurbished again with the store rebranding from SPAR to Londis and a new Greggs store being added.

Another refurbishment in February 2022 saw the updated Londis branding added to the site along with additional ranges and grab and go options inside. Meanwhile, six new electric vehicle charging points are planned.

The petrol station is one of 87 petrol stations that MFG intends to sell in 2022 under a deal with the Competition and Markets Authority. Meanwhile there are plans to add six new electric vehicle charging points to the forecourt.