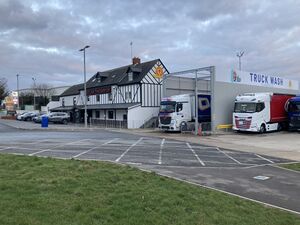 Signposted from the road? From the A4500 only

The Red Lion Truckstop is a large pub with lorry parking signposted from the A4500, positioned close to M1 J16.

Access is available in both directions and cars can park outside the entrance.

First two hours free for all vehicles after which HGVs must pay £1 per hour for stays up to 8 hours.

Overnight parking is available for £26, or £30 which includes a £12 meal voucher.

Prices are paid in the bar, and can be paid using GBP, Euros, using fuel cards or SNAP. 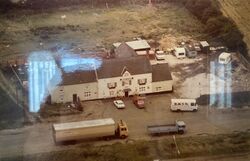 The Red Lion in 1973, before it became a truckstop.

The amenity building here is an old inn positioned on what used to be the main A45, but this was bypassed by the new dual carriageway and renumbered.

Access used to be provided by a gap in the dual carriageway, and some visitors would park on the section of old road. The road layout was all changed in 2021, with a new roundabout provided, and the old road made much narrower. A lot of trees were removed during this work, making the building visible from the main road once again.

The Red Lion pub became an official truckstop in the early 1980s when land around the back of the pub was dedicated for parking. The truckstop went onto gain restaurant facilities in the pub as well as a games room and diesel bunkering facilities in the lorry park during the 1980s.

Norfolk House, the owners of Kelly's Kitchen, proposed to add a filling station, restaurant and hotel to the west of the Red Lion in 1989. They received planning permission, but they were never built.

The Red Lion came under threat in 1999 when planning permission was granted for a hotel with leisure facilities to replace the pub. These plans were renewed in 2003 but the pub remained.

Fuel facilities were later removed from the site in the 2000s before the site gained a new, full-size, Certas Energy-operated HGV refuelling bunker in September 2019. As part of this work, a hard surface was provided for the parking area.