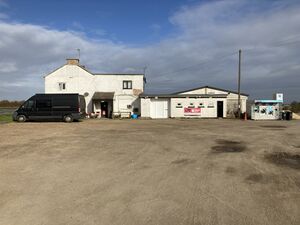 A1 between Stamford and Colsterworth

New Fox is one of many great landmarks on the A1, but it isn't signposted as an official service area.

HGV parking is available at The Old Fox Truckstop, with overnight parking charged at £30 per night.

Prices are paid in the pub, and can be paid using GBP, Euros, using fuel cards or SNAP. 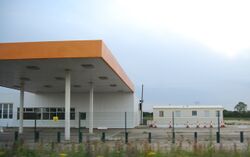 Despite not being signed and some of its facilities having closed, New Fox is still marked as a service area by Ordnance Survey.

This section of the A1 doubles-up as both the historic Great North Road and Ermine Street. Both sites here are also exactly 100 miles from the start of the A1 in London.

The Fox Beer House used to serve weary travellers as they made their way up these roads, positioned next to a track leading to Woodbine Cottage.

Following the upgrade of the A1 to become a dual carriageway in 1971, some cottages next to the Inn were demolished and replaced by a petrol station and a building provided for use by the Post Office. There was an additional garage on the northbound side, and a series of gaps in the barrier were provided for traffic to turn around.

Looking for a quick expansion on this busy road, Forte built a Little ChefHistory next to the northbound petrol station in May 1984. This was followed shortly by the adjoining Little Chef Lodge, which later became Travelodge. The pub changed its branding to the New Fox Inn, and as a result the restaurant came to be known as the New Fox branch.

A southbound Little ChefHistory was then built here in 1988, but with so many Little Chefs in the area this one had closed by 2003 and became an OK Diner. Unusually for them, this building is very clearly a re-purposed Little Chef, with its brick building and two point-roof. Both petrol stations closed; southbound became the office for a coach company and northbound became a caravan showroom before becoming an MG dealer.

The Little Chef Lodge received significant media attention following a 12-hour siege on 9 September 1989. Guests had been safely evacuated from their rooms, while the assailant was later found dead.

The northbound Little Chef survived until it was taken over by Euro Garages in 2017, who closed it that July and turned it into a Starbucks. They removed the unusual conservatory to give it a more typical coffee shop front. The gap in the central barrier still survives, and now looks very out-of-place on such a busy road.

There were plans in 2012 to demolish The Fox pub and replace it with a new hotel, restaurant and fast food outlet. A similar plan was put forward again in summer 2019 by 'The Fox Roadside Services Limited'. This plan includes demolishing the pub, OK Diner restaurant and former filling station and building a combined 40-bed hotel with restaurant and new filling station. As of June 2021, the plans are still pending consideration. As a result of the planning application, the former owners of The Fox pub decided to close their doors on 17 October 2019 and put the pub up for sale. The pub has since reopened and primarily serves as a truckstop.

A Revolution Laundry machine was added next to The Fox pub in May 2022.