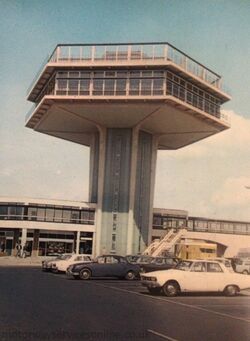 You can't ignore the 65-foot (20m) tower that is now surrounded by the northbound amenity building at Lancaster services. It was described in one of its many opening leaflets as being a "luxury observation platform".

Its official title is The Pennine Tower, and it is the most famous example of motorway architecture in the country.

The Pennine Tower was designed to make the service area (originally called 'Forton services') clearly visible. Operators were banned from advertising to road users, so they had previously tried to grab attention by building above the road (like down the road at Charnock Richard), but this had proven to be expensive and impractical.

Rank commissioned architects T P Bennett & Sons to capitalise on the benefits of exciting design while trying something different. The tower resembles a style used by air traffic control rooms, evoking the ambition of the '60s.

The tower's central shaft consists of two lifts, which kept most of their original fittings through to 2017, meaning the two lift cars had become big favourites among lift fans. The two cars operated at each end of a pulley system. They were a strange, pentagon shape to ensure the two lift cars would fit within half of the tower's shaft. This meant that, when the lift cars were eventually replaced, a bespoke design was needed.

These new lift cars are still in public use for getting to the first floor, but the buttons to the higher floors are disabled. Next to them are three service lifts and one spiral staircase - satisfying basic legacy health and safety regulations. Customers were supposed to stick to the lifts: the staircase consists of exposed metal and concrete, and is cold and noisy, although the end that was visible to the public was wooden.

At the top of the tower stood a fine-dining, waitress service restaurant, with seating that offered views over the road below and across Lancashire. Above the restaurant, the lift extended to roof-level, to allow the roof to serve as a sun terrace - although Rank themselves admitted they weren't sure what this space would actually be used for, going on to suggest they could use it to serve tea or eventually build a roof over it. The structure was designed to take a second storey, and the main restaurant used flexible partitions.

The sun terrace has an additional balcony-like section running around it, with its own metal fence. This was only provided to maintain the glass panels, and wasn't meant to be a public facility.

Although the tower is unique to this service area, the concept of large high-level floors can be seen in many Rank service areas of that era, the idea of each one being to have a visible landmark and a good view of the surrounding area, such as at Hilton Park. Even the lower-level restaurant at Forton sticks out over the ground floor, and almost over the road, to give an optimum view. The main toilets and offices were in the ground floor buildings below, though some toilets were available in the tower.

The tower was never supposed to revolve.

Moto are adamant the tower qualifies Lancaster as the country's most famous service station, and that The Beatles were one of its first customers. Indie-rock band Half Man Half Biscuit filmed the music video for 'Dickie Davies Eyes' there in 1986.

A 2008 exhibition in Lancaster city which celebrated 50 years of the M6 featured a replica of the restaurant inside the Pennine Tower as it would be if it were still trading. At the same time Top Gear Magazine used the view from the tower to create a mocked-up image of the car park in the 1960s. 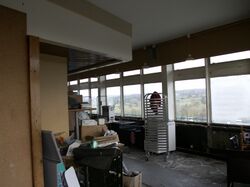 Inside the tower in 2013. Although in a poor state, the restaurant counter can still be made out.

During the first three months of 1967, the tower-restaurant recorded a £700 loss (approximately £12,000 in 2017). While that's the only period for which precise figures are available, it confirms that even during the supposed peak of the motoring-dining era, the tower was struggling to cover its basic running costs. Rank complained that most visitors weren't buying anything, and that traffic levels were much lower than expected.

Fast forward a few years and cost-cutting was having an an additional impact, plus social changes and driving becoming less leisurely all meant that the tower's prospects were bleak. Most of Rank's restaurants were soon struggling to make any money, and the unique running costs and impracticality of the tower meant it was especially difficult to justify. The desperate cutbacks meant the food was soon described as "an insult".

What was left of the 'fine dining' restaurant was converted to a trucker's lounge, swapping with the facilities downstairs, before the tower closed completely l to the public in 1989. It then soldiered on for another 15 years, partially re-fitted, as a head office, then as staff training and storage, but even this became too impractical, and the tower is now not used at all.

The tower had space to hold more than 120 diners. It is true that modern fire regulations wouldn't allow 120 people to congregate in the tower, so it wouldn't be able to operate at full capacity and staff would have to count how many people came up. However the reality is that for most of its life the tower would have struggled to attract 120 diners at any one time, and patronage was usually in the single figures.

When it closed, a partition by the entrance prevented access to the staircase, except via a new staff door to the side of the lifts. Access to the stairway is now prohibited as the structure is lined with blue asbestos. The lift manufacturer ensured that the buttons to reach the top floors would only work if a lift key was presented, although this was the company's standard lift key.

Future Of The Tower

There have always been rumours about the condition of the tower. Like any building which hasn't been used for 30 years it would take a lot of investment to get it open again, but that investment would be made if there was a business case for it. The fire regulations are a bit of a red herring because the building could have been modified (before it was listed), or more likely a limit could be placed on how many people used it: the lifts can only carry three people at a time anyway, so you can't have a surge if guests. Disabled access would be a much more difficult hurdle to overcome: the building has lift access, but those lifts are old and not accessible and, even ignoring the asbestos, the staircase wouldn't be an accessible evacuation route.

"It is time to recognise and appreciate the positive contribution [motorways] have made to England's heritage."
English Heritage, 2012

With roadside restaurants across the country closing due to a lack of trade, it is unlikely that a case will be made for reopening The Pennine Tower as a restaurant. There is some evidence that it could prove popular as a viewing platform - not so much because the view is breathtaking, but purely because it's unusual - but again tidying it up and removing 30 years of detritus would be expensive and no business would do that without receiving any return.

While there has been some public momentum behind the idea of doing something with the tower, that momentum comes mostly from enthusiasts and curious passers-by; it doesn't necessarily mean that customers would turn up in their droves. In 2015, Moto stated that "the building has no viable use".

The Pennine Tower was marked as a Grade II listed building in October 2012, though many people assumed it had been listed already. Moto supported historians by sharing their records of the building. They also decorated the restaurant at Lancaster with photos of the tower. Moto's internal records include the unofficial history website, which is maintained by a former employee.

When the tower was listed, its colour was recorded as "green". In Spring 2016, Moto asked for this to be corrected, and they repainted the building in 'light ivory', which is believed to be its original colour. Moto had gone against their own corporate styling, to preserve the heritage of the tower.

Contrary to a rumour that a few individuals are keen to spread in discussion groups, there is no proposal to demolish The Pennine Tower. There have been serious investigations carried out to see whether the tower could be converted into a coffee shop, but the conclusion was that no, it would be prohibitively expensive.

All our photos from inside the tower were taken with permission from Moto. Many people ask how they can gain access to the tower. As of 2021 our understanding is that Moto aren't able to allow any visitors, but if you really want to know, you'd have to ask them. Motorway Services Online does not condone the unauthorised entry to non-public areas.