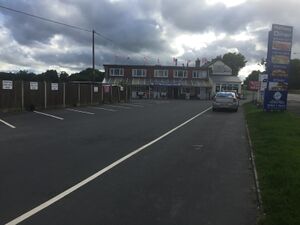 Only one photo tagged with Halfway House. If you have one, why not upload it?

A458 in Halfway House

Halfway House is a common name. This one is in the Shropshire village called Halfway House, not Essex, Northumberland or North Yorkshire.

The Halfway Diner and a local shop form a facility on the A458. Recently, an official sign calling it "Services" was erected, so it has earned a place in our catalogue.

'Halfway House' is a common name for a roadside facility, but in this case the name is given to the village of Halfway House, thought to be named after the pub. It is half way between Shrewsbury and Welshpool, and also between Birmingham and Aberystwyth.

The main property here was called The Chestnuts. It shared a large forecourt with a garage, which has since closed and become a caravan dealer.

There was a much larger service area proposed near here in 1993, at the nearby junction with the B4393. The proposal was refused and its appeal was thrown out after less than a day. This event was held up by several developers as an example of why they see investing in service areas as a waste of time.

The service area is unfortunately closely associated with the murder of the diner's owner, Satnam Singh Blugher, in June 2017. An employee and family member was sentenced to 27 years for the murder.

The diner was prominently signposted in both directions with road signs describing parking, toilets and payphones, which was somewhat more than many other diners had. The aim appeared to be to deter people from staying in the lay-bys. In around 2010, one westbound sign was replaced with a "Services" sign.

While the new sign has a few technical errors (and gives a more advance warning than you'd find on a motorway), it's enough to record it as an official service area in our books. Strictly speaking the fuel symbol (and an accompanying petrol station) is mandatory for a "Services" sign, but the local authority has overlooked this.