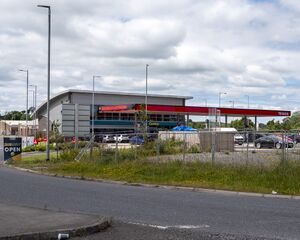 A4 at Dungannon
(close to the M1

Until 2015, Northern Ireland didn't have any official motorway service areas. What it had instead were a couple of odd places - and the service area at Dungannon is testament to that.

Firstly, it doesn't have official signs directing people to it, but the new A4 does have several non-standard signs pointing to a place called "Motorway Restaurant". Other sources claim that the place is called M1 Services, M1 Service Area or M1 Service Station. Any of those could be correct title, but it doesn't change the fact that the nearest motorway is almost two miles away! 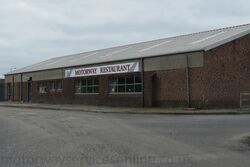 The previous restaurant building, pictured in 2017.

A pair of BP petrol stations were built on the original, single carriageway A4 in November 1980. Gushing media reports at the time called it "Northern Ireland's first motorway service station" - with nobody pointing out that it wasn't near a motorway.

The larger westbound side had its own self-service restaurant, known as the Motorway Restaurant. The development cost a total of £100,000.

The larger westbound side tended to be busier, and was eventually given a Subway store.

The Motorway Restaurant would be re-built in 2008, and could continue to boast that it was one of Northern Ireland's only restaurants near a motorway.

The same year, work started on upgrading the A4 to a dual carriageway. This would cause many changes to the site. Firstly, the upgrades resulted in the closure and eventual demolition of the quieter eastbound petrol station, with much of the land it sat on becoming unused. As well as this, the westbound petrol station would also lose its direct access to the A4, with a new entrance being provided via a new roundabout junction.

To take advantage of these changes, construction was started on a new petrol station located closer to this new entrance. The new site was given a large, two-storey sales shop, with space made available for multiple retailers to operate in the building. However, for reasons unknown, construction on the new site suddenly stopped, and it would stand empty for many years.

Despite this, with a possible replacement looming, work on maintaining the old petrol station stopped. Its old branding and rough road surface stuck out like a sore, unloved thumb. The Subway counter in the back of the shop would soon close down.

Work would eventually recommence on the abandoned site in 2019. It was soon revealed that this new site would be open 24 hours and branded Texaco, with the Subway reopening alongside a Centra store. Space would also be left for other retailers to open up. The Motorway Restaurant soon also confirmed a move into the new building in August 2019, announcing that they would open on the second floor. The new site eventually open on 22 August 2019, with the Motorway Restaurant opening a week later.

After the opening of the new site, the original westbound BP was then left abandoned and shuttered.