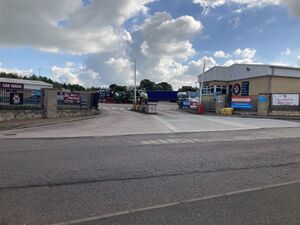 This large truckstop provides a convenient rest stop for HGVs heading in and out of Glasgow and is one of a few signposted truckstops signed from the A74(M) and M74.

Prices are paid in the shop, and can be paid using GBP, Euros, fuel cards or SNAP.

This junction used to serve 'The Star Truckstop', which was built next to the motorway and opened shortly after the M74, in July 1987. It had 200 parking spaces and sold Shell fuel, as well as having a bar, accommodation and a snooker room.

The Star was renamed Europa Truckstop in the 1990s and was also known as Cedar Park. It closed in the mid-2000s and is now the supermarket.

A few years later, plans emerged to build a new truckstop behind the supermarket. It was put forward by Scottish aggregates firm Patersons Quarries and opened in 2013.

The site includes secure parking for 150 HGVs and 25 cars, a HGV fuel bunkering area, separate car and HGV wash bays and an amenity building with a 100-seater restaurant and shop.

Traffic Scotland erected new signs on the M74 during 2017 advertising the new facility to motorway traffic.