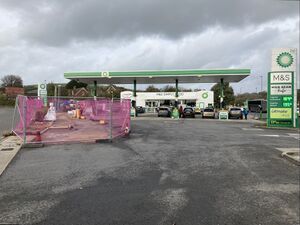 Really this is two separate services, positioned at two exits of the A23 near Pyecombe. It is possible to drive between the two, but the signage encourages traffic to stick to the facility for its side.

No HGV parking is available at either site. 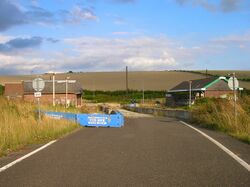 The old southbound garage buildings before being demolished.

Both garages date back to the 1930s. The northbound side was built in the corner of the realigned West Road and the A23 Dale Hill. When the A23 was realigned, the old road became part of the forecourt. The site has been operated by Tates, who run the used car dealer here, since at least the 1970s and continues to be to this day. The site was originally known as the 'Blue Star Garage'.

The southbound one was built right in the middle of the split between the A23 and the B2036 (now A273). The original alignment of these two roads now forms part of the circulatory roads used to access the modern petrol station. The filling station had a neighbouring garage however this was closed and demolished in 2008 to make way for an upgraded, much larger re-built petrol station. The new filling station became one a BP Express site and gained a M&S Simply Food store and Wild Bean Café.