What is a service area? 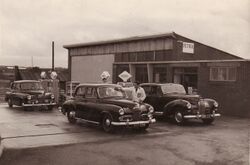 The old service stations that gave way to the modern service area.

This website writes a lot about service areas, but what actually is one? If you over-think it, it can get a little complicated.

England's national highway authority has its own definition for what they consider to be qualifying motorway service areas and other service areas. Once a place qualifies, it can receive signposts, and only then can it be considered official. This website will occasionally throw in the words "official" or "signed" to distance the qualifying service areas from any unapproved imposters.

Outside the monochrome world of government policy, the phrases "service area", "service station" and "services" are often used colloquially, with a more vague meaning. According to the Cambridge Dictionary, a service area is:

a place near a large road that has toilets and shops selling fuel, food, drink, and other things that people want on their journey

This would make sense, and it would reflect how most people see it. A place can meet all those expectations without completing the government's requirements, and therefore be considered by most people to be an unofficial service area. You will often hear places in that category call themselves a "roadside service area" (RSA), a phrase that has no legal meaning.

It also underlines one key point: a petrol station is only one part of a service area. Once it gains other facilities, it becomes a service area. A motorway resting area that meets certain criteria but not all will be classed as a rest area, while the same on an A-road would merely be a lay-by.

At the end of the day, the UK's government doesn't keep a record of where the country's service areas are - they usually use this website. So our effort to make some sense of the muddled system is about as factual as you're going to get. (This is different to Ireland, where a list of official motorway and non-motorway service areas is included in the country's equivalent of the Highway Code.)

The history of these terms, especially the linguistically confusing word "services", is quite odd. The dictionary claims that "services" is a plural, even though it describes a single place, a bit like how a "group of mountains" may be describing a single place.

Early in the motoring era, it was common for places that sold fuel to also perform vehicle maintenance, meaning they became known as "service stations" or places that offered different "services" for your vehicle. The Special Roads Act of 1955 allowed for "service stations" like those, which would go on to become the full range of "services" that are offered on the motorway today. Even today, many petrol stations will refer to their tyre pressure gauges as their "service area".

The history of the motorway service area is well documented, but as many garages used to sell both fuel and refreshments, it would be difficult to find the oldest example of a modern service area. A nice example is Kings Worthy, where a pair of petrol stations were built on a new dual carriageway in 1946.

Some businesses have tried to invent their own words for this. Top Rank used the word "motorport", while Ireland's Plaza Group uses the American word "plaza".