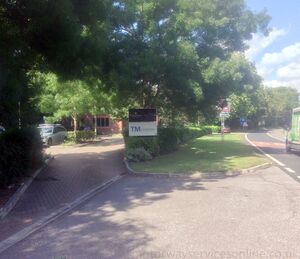 A former independent garage dating back to the 1940s is not especially remarkable: they exist in suburbs all over the country.

What makes Kings Worthy stand out a little bit more is that it was built on a brand new bypass; a fast and rural road which had almost no other buildings along it. It had (very short) slip roads connecting to the main road. The basic concept was very similar to a modern motorway service area.

The A33 Winchester Bypass opened in 1940, and was itself one of the first rural dual carriageways in the country, relieving the narrow streets of Winchester long before the idea of a motorway had been defined in detail.

The new facility made up for the fact the A33 no longer passed through Kings Worthy, Abbotts Barton and St Cross. It was known as the By-Pass Service Station. It was built at the far northern end of the bypass, meaning it had good access to the villages but was also the last facility before the A33 began its long drag to Basingstoke. Britain From Above has photos from this era.

The garages opened in 1946 and grew as passing trade increased, including gaining a small single-storey service building. The A33 was realigned in 1969 and the northbound forecourt had to be moved. In its later years it was branded Shell, and was also used to sell cars.

This part of the A33 was replaced by the M3 in 1986, and the By-Pass Service Station closed. After many years, that new section of the M3 gained a replacement service area at Winchester.

The garages were demolished, and the southbound concrete apron was grassed over, while the northbound apron was turned into a business (northbound). The realigned northbound entry and exit slips are still used to access this.