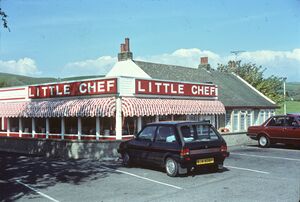 Newby services was signposted as a full service station, but it only ever offered a restaurant, causing some customers and staff to feel the signs should be taken down.

It first opened as a small, flat-roofed restaurant in the 1950s. This was positioned next to a farmhouse-style building. These were taken over by Little ChefHistory in the 1970s, and re-built by them in the 1980s following storm damage. In its rural location, the restaurant was judged to be under-performing by Little Chef and closed in January 2012.

Some of the staff stayed on and ran it as Diner 65, later Goat Gap Cafe.