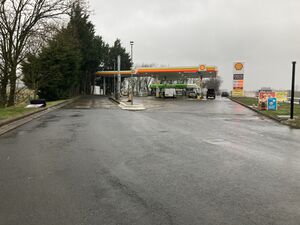 9 more photos in the gallery
Location:

A6055 near Scotch Corner

High Brough Moor is a large petrol station which once served the A1, but it has now been relegated to a tiny A-road serving Catterick. Despite this fall from grace, it appears to be soldiering on.

The A6055 here is a historic road. It started as a Roman Road, known as High Street. This became the main A1, and in the 1960s that was upgraded to dual carriageway with the old road becoming the new northbound side. In 2017 the new A1(M) was built to the east, with the old road being downgraded.

High Brough Moor was known as Beacon Garage when it opened in the 1970s. A short distance to the south was The Clock café, which was built within Skeeby Plantation. By the end of the 1970s it had become the Skeeby branch of Little ChefHistory, which was itself joined by a Little Chef Lodge - now the Travelodge which still exists today. A Coffee Stop was added, which was later removed. Signage was transferred from former locations to open a Coffee Tempo, however this closed in 2011.

To the north, a petrol station was built on either side of the road, at the important Scotch Corner junction. The southbound side also had the Crown Farm Café, which replaced an old pub. These closed after the new Scotch Corner Roundabout opened, with Scotch Corner services. This would later have its own Little Chef and Travelodge.

High Brough Moor had signs on the A1 pointing to the petrol station only. Immediately afterwards were signs advising traffic it can also stop at Scotch Corner.

The Little Chef was driven into by a truck on 23 February 2016 causing minor structural damage to the restaurant building. The restaurant was evacuated around 17:15 and reopened around 17:45 with minimal disruption caused to diners.

Anticipating the motorway upgrade, the forecourt closed on 7 April 2016, followed by the the Little Chef in 2017, which was also not a surprise as the brand had been purchased by Euro Garages, who were closing the restaurants. The forecourt reopened again on 1 November 2018 after Penny Petroleum acquired the site from Shell. It continues to advertise 24 hour opening. The wide entrance and exit give away that it was once on a busy and fast-flowing dual carriageway.