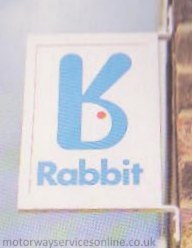 Rabbit provided a national network of cordless telephones and corresponding base stations. It was provided by Hutchinson Telecom, who went on to found the Orange mobile phone company.

The base stations were basically small mobile phone masts which allowed anyone within a 100 to 200 metre radius with a Rabbit phone to make outgoing calls. These were provided at most motorway services, town centres, restaurants and petrol stations.

The Rabbit logo was popular among sales reps in the 1990s, until the rise of the mobile phone.