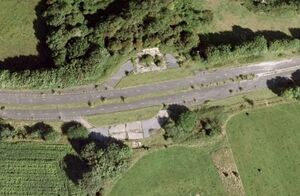 Only one photo tagged with Briton Ferry. If you have one, why not upload it?

The A48 Briton Ferry Bypass included a service station close to Skewen, generally known as Earlswood.

The road was built in the 1960s and closed in 1994, so the service station would have had a similar time-frame. Although the facility we are looking at was extremely small by major road standards, it was still a purpose-built pair of petrol stations on an isolated section of brand new, rural dual carriageway, meaning it is actually a very early example of a purpose-built service area as we would recognise it.

There were plans to develop the service area throughout the 1970s, adding a restaurant or a hotel, but little progress was made before the A48 was eventually replaced by the new M4.

Today you will find the site of the service station near the M4 between J43 and J44. The old A48 and its service station were left abandoned, but in 2012 they were turned into a housing estate called Cae Morfa. The new road runs right down the middle of where the A48 would have been.

This article or section of an article is a stub. If you can, please expand it.